Warning: Creating default object from empty value in /home/gssn/public_html/ipsorg/blog/ips/wp-content/themes/platform/admin/class.options.metapanel.php on line 49
 Breakthrough for Women at the UN | IPS Writers in the Blogosphere

Is Richard Goldstone an anti-Semite? Dogs, Donkeys and Women, Oh My!

Breakthrough for Women at the UN 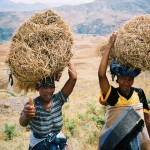 A breakthrough for us as well? M. Sayagues

The UN has finally decided to stand up for women!  A decision to create a new agency for women was taken by the General Assembly on September14.

Our colleague Thalif Deen, IPS bureau chief in New York, was the first and only journalist to report it for the first several hours.

But this blog is not to crow about our scoop.

I’m quite excited by the prospect of a new women’s agency with money and political power. No longer will the world’s feminists have to lobby from the outside to put their views on the table. They have now won admission to the high table.

Any one of those bright, articulate, activist women can emerge to lead the agency. The reality is likely to be less rosy. But chances are that, because it’s new, it will be less under the thumb of the old boy network.

You think I’m a romantic? What the hell, there is no harm in dreaming, is there?  I like to think that there was no way that the General Assembly could have once again shelved the plan for a new women’s agency.

It’s 14 years since Beijing. All the small and big things that governments were forced to accept around women’s rights (CEDAW, MDG, etc.) made it impossible for any country to block the efforts of myriad initiatives (from small grassroots groups to reforms in government policies even if they started as mere tokenism) and to politicise the cause of gender equality.

I do see great hope in the increasing presence of women in politics – Liberia, Japan, India, wherever you look, even Iran (new ministers) and the Gulf (Saudi Arabia has made a few small concessions to women!).

Of course, there is a backlash too – more violence against women worldwide.

As IPS gender editor,  I am sure we will keep track of the new agency as it will be a key player achieving the MDG3 goal – gender equality.