Petraeus Confirms Link Between Israel-Palestine and U.S. Security Goldberg Won't Shut Up Either

Getting to women’s day every day 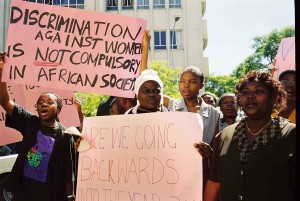 For how long do we have to keep demanding our rights? Credit: Mercedes Sayagues/IPS

International Women’s Day has come and gone and government and civil society representatives of women have packed up and flown back home from the Beijing +15 review at the annual Commission on the Status of Women (CSW) in New York.

For International Women’s Day there was plenty of activity, with celebrations and commemorations around the world. More ordinary women and men now know about this international day to celebrate women than ever before. Just ten years ago you might have struggled to get a significant positive response if you went out into the streets and asked random people if or what they knew about March 8th.

The theme for this year, “Equal rights, equal opportunities, progress for all”, mirrors what the first organizers of IWD had in mind 100 years ago when they organised for millions of women and men to come out on the streets in Europe to demand equal rights for women.

But this year I did not get the feeling that 8th March was used as a real rallying point for activism on a particular issue on women. This seems to have been the general feeling coming out of the Beijing +15 meet in New York as well.

Following the events there I got the impression that the feeling was one of lost gains and lost focus in contrast to the vibrant activism of that global meeting of women 15 years ago. We have ever multiplying to-do lists of things that need to be achieved within set time frames but the progress in terms of women’s lived realities has been very slow.

One of the statements in Wendy Harcourt’s guest blog from the CSW last week rang true for me where she quotes a delegate from Latin America saying, “why do we expect the UN and governments to take up our agenda? We have to make our own agenda.”

Part of that agenda relates to the proposed new UN gender entity to be headed by a new Under Secretary-General that women’s rights activists have been pushing for over the last three years. But not only is progress on that machinery slow and mired in controversy, it still places the onus for progress on the UN and governments.

Here in Southern Africa there is also growing dissatisfaction from young women who feel the women’s movement has not created room for them. For the most part, they are going out and creating their own agenda that the broader women’s movement needs to acknowledge and actively support if we are to move forward.