Warning: Creating default object from empty value in /home/gssn/public_html/ipsorg/blog/ips/wp-content/themes/platform/admin/class.options.metapanel.php on line 49
 “I Want to See the Murderers Punished” | IPS Writers in the Blogosphere

“I Want to See the Murderers Punished” 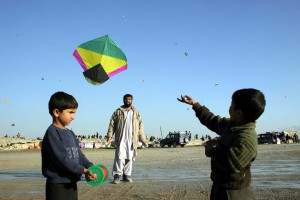 By Neelab Nassiri/ Killid
The Kabul sky is dotted with kites on summer evenings. For Mohammad Masoud Nassiri, 40, they bring back painful memories of the evening when his parents and sister were killed. Seconds before the blast he had let go his father’s hand to run after a falling kite. What follows is a testimony.**
Kites are a national passion in Afghanistan. Boys grow up learning how to get it into the air and “cut” a rival’s kite. They dart through traffic and jump over boundary walls, risking life and limb, to catch falling kites. The one who gets to it first is the proud, new owner.

Masoud recalls he was with his family, walking to visit an uncle in Dehbori, when he saw a kite floating free.

“Automatically my hand let go of my father’s and I crossed the road. I was running after the kite when I heard a terrible explosion,” he says. “When the dust and smoke settled there was blood everywhere. My parents were both dead. One sister was dead, and another was alive but covered in blood. My brother was calling out to our mother.”

The year was 1990. It was a hot evening in the month of Asad (July-August). The government led by Dr Najibullah was under increasing attack from the US-armed mujahedin. Rockets were being fired from Kohsafi (mountain in the east of Kabul) and Paghman. But Kabul’s youth continued to fly kites from the rooftops.

“I didn’t know much about the political situation of the time,” Masoud says. “All I remember was hearing rockets and knowing people were dying every day. We tried to lead a normal life, and so it was that my parents, brother, sisters and I were going to an uncle’s house.”

Masoud remembers the wind was strong that evening, ideal for kite flying. Kabul was practically under siege. The forces of Ittihad-e-Islami were positioned in Paghman and in its mountains, while areas such as Logar, Char Asiab, Saroobi and Khak-e-Jabar were under the control of Hezb-e-Islami. The city was constantly being bombarded. Rockets would often miss their targets and land on residential areas.

“When the rocket hit and the dust decreased I found I had lost everything. I was terrified. A taxi stopped, and the driver took my brother to hospital. Another taxi took my sister to hospital. An old man put a shawl over my parents. That was the moment I knew they were dead. I removed the shawl to take another look.”

In a daze the 10 year old started walking back home. On the way he met his eldest brother who had heard the blast. “He did not know what happened. He asked me where was I going, where was my father? I just kept weeping.”

Relatives took the bodies to Aliabad and the ICRC hospitals. They were buried in Shohadaye Salehin graveyard. “Every time I pass Dehbori or the graveyard I remember the deaths. Our neighbour who was a mechanic and his two daughters were also martyred.”

A year later the mujahedin toppled the Najib government and imprisoned the president. But the situation only got worse for Kabul’s residents with rival mujahedin factions fighting each other to gain control. Those who could leave the city did. Others like Masoud, his two brothers and two sisters – one an infant of two months when their parents died – struggled to survive against all odds.

“Opposite our house was a correction home for criminal children less than 18 years old. It was managed by the National Security Department during Dr Najib’s government but when the mujahedin came it was captured by the Harakat-e-Islami.  A good man called Mohammad Naeem Qazawi was the head commander.  One day he summoned my elder brother to find out about our situation. He told him to work as a member of the criminal department in the sixth security district. My brother was not more than 15 years old. He worked for nine months; he was paid 29,000 Afs per month (now roughly 550 USD) which was useful money for our family.”

The battle lines in the never-ending war for Kabul were again being redrawn. Harakat-e-Islami fighters were forced to retreat by the Hezb-e-Wahdat. Masoud’s uncle assumed guardianship of the family, and they moved into his house in Kart-e-Sea.

The civil war raged till 1996 when the Taleban captured Kabul. Their harsh rule ended only in 2001 when US forces invaded Afghanistan to oust al Qaeda forces. The Taleban fled to the border areas between Afghanistan and Pakistan.

Was there justice for the war victims?

“Those who have shed the blood of Kabul residents before and during the civil war years are now sitting in the government,” says Masoud who is a journalist, like his brother and one sister. “Life is passing well for us,” he adds, “(but) I want to see the conviction and punishment of those who murdered people in public.”

** The testimonies of survivors of war crimes are a contribution to creating greater public awareness about people’s hopes and claims for justice, reconciliation and peace. These life stories are distributed internationally by IPS-Inter Press Service and are the basis for a radio drama that is being broadcast by seven Killid radios.