Warning: Creating default object from empty value in /home/gssn/public_html/ipsorg/blog/ips/wp-content/themes/platform/admin/class.options.metapanel.php on line 49
 A female”hibakusha” speaks out | IPS Writers in the Blogosphere 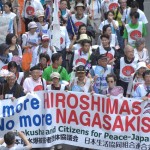 Thank you for asking me to write about myself. I am happy to share my experiences.
Actually, it is only recently that I have begun to talk about my life as an atomic bomb survivor from Nagasaki.  I am now 66 years old but I got the courage to talk to others only about two years ago. Till then I have kept the fact that I am an atomic bomb survivor just within my family.

There are reasons why I have kept silent. The most important reason is fear of stigma and discrimination. For the public there is the image that we are dangerous to others because we are contaminated with radiation. Therefore, my mother never told me I was a survivor. She also never talked about the fact that she was also affected by the bomb and so was my older sister. So I never knew that I was exposed to radiation from the bomb when I was just one year old. I was sleeping when Nagasaki was bombed and therefore I do not have any recollection of what happened. It was only when I was in my twenties that my mother told me to apply for the government Hibakusha identity card which allows me free medical care. It was only then that I knew. I was married by then and had to tell my husband. He told me not to tell anyone else.

One of the biggest fears among hibakusha is not being able to get married. Normal Japanese do not want to marry us because they fear our children will not be healthy. This is a stigma that we, especially women, want to avoid.

I am considered one of the “young” generation atomic bomb survivors. This group is comprised of people in their sixties who were infants or very young children so we do not have strong memories of the physical suffering that our parents went through. We also were not told about our status and we rarely discussed with our parents about the atomic bomb. Therefore, we represent a generation who hardly understand the tragic history of that period. This ignorance was stark to me when I went to New York in May to participate in the Nuclear nonproliferation Treaty conference in the United Nations. There I was questioned by the American audience. A particularly difficult question for me to answer was whether I was angry with the Americans for dropping the bomb on Nagasaki. It may sound strange to foreign audience but really, I do not harbour hatred towards the Americans nor am I seeking an apology. I believe strongly that my mission is to work with the Americans and the rest of the world towards stopping the proliferation of nuclear-weapons. This is my dream and this is the reason why I decided I have to speak out finally.

Today, I feel a strong responsibility to work towards this goal and as a atomic bomb survivor, I know my role is special. We represent the tragic testimony to the nightmare of nuclear weapons. I want the public to know and understand the human catastrophe caused by nuclear weapons. The uranium bomb dropped on Hiroshima and Nagasaki wiped out tens of thousands of people, injured many more, and causes suffering even 65 years after those fateful days. Why should people have to suffer for the mistakes made by irresponsible politicians. This nightmare must never be repeated.

I am deeply grateful to U.S. President Obama who has pledged to make a nuclear-weapon free world. The visit of the American ambassador to Hiroshima on August 6th has brought much hope to us. So has the visit of U.N. chief, Ban Ki Moon. His presence and specch in Hiroshima and Nagasaki was wonderful. We must all work together now towards our goal.

I have a daughter who is 44 years and married. She, too, is identified as a second generation hibakusha and carries with her an identity card. Compared to the embarrassment and shame I have gone through, I find that my daughter is not plagued with the same doubts. She reacted to my explanation to her quite matter-of-factly. I thought she is very brave and represents the young generation of Japanese today who are eager to learn about the past. Japanese text books hardly discuss these important issues objectively and youth have to learn more. This is why I will keep devoted to my work which is to continue to talk about my experience. I know my testimony is contributing to peace because people listen to us because we are the living proof of the horror of a nuclear war.

Thank you again for listening to my story.

Editors note. The atomic bomb was dropped by the United States on Hiroshima on August 6. 1945 and later on Nagasaki on August 9, 1945.
“Hibakusha” is the Japanese name for atomic bomb survivor.