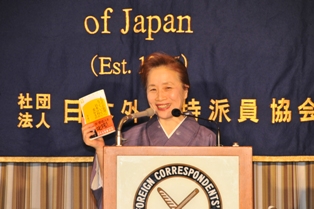 There was a buzz of excitement at the Foreign Correspondent’s Club of Japan that invited Nobuko Kan, wife of the Japanese Prime Minister, Naoto Kan, to speak to the press. After all, as First Lady of the country, her comments and opinions are important, not only for learning more about Japan`s leader now struggling with poor approval rates, but also as a woman who, whether she likes it or not, is a role model for the female population that faces huge challenges in a country mired with a sluggish economy and low birth rates.

Dressed in an elegant kimono, Ms Kan, 66, who has lead the traditional and sheltered role of her generation as wife, mother and homemaker, fielded a battery of tough questions from both Japanese and foreign media. Crucial subjects –Japan’s difficult relations with China, its fiscal deficit, the dire need for a new immigration policy that would open up its closed doors to foreigners, and reforming its protected agricultural sector, were covered. As well on the domestic front, the First Lady was also asked for her comments on inside party political bickering and pressed to predict how long her embattled husband could survive in the Prime Minister’s official residence.

Ms Kan fielded the questions bravely explaining or mostly excusing herself for not being able to be a competent authority given her position as a simple home maker. For example, on Japan-China relations, she referred to her license as tea ceremony teacher to talk about the origins of the revered tradition that originated in China. “The special utensils used in the ceremony and green tea arrived in Japan from China. We must forget the sharing between Japan and China,” was her message while stoutly avoiding reference to recent territorial clashes over islands in the Japan Sea that are claimed by both countries. On immigration, another controversial issue in Japan, Ms Kan point blankly told the reporter she has “not even thought of the topic”. Immigration discussion in Japan pitches the powerful conservative lobby against proponents who argue, based on their research, that allowing more foreigners into Japan for employment in sectors that include welfare and medical facilities, will not only provide valuable help to the elderly but also boost the economy by as much as ten percent. “ I guess the fact that I, as a individual, have not even thought of the debates in the immigration policy indicates I am Japanese” she laughed, a comment reflecting a typical answer in Japan that indicates the depth in public aversion towards an honest discussion on opening up their country.

Perhaps, where Ms Kan sparkled most were her answers on her role as wife of the prime minister. Gaining laughs from the audience, she spoke about how she “scolds, scolds and scolds” her husband when they discuss politics. She also revealed personal details such as remarks by her husband who tells her” he would rather face the bullying of the Japanese Diet than fight with her.”. The chock-a block hall roared with laughter for these answers appeals to popular sentiment by reinforcing characteristic roles of spouses in Japan, albeit more deeply entrenched among the older generation. An important responsibility of a wife in Japanese society is to “care for and nurture” her husband and gentle admonishing by her, as if treating a child, is the accepted way to go. The rather more fierce attitude of Ms Kan`s also falls into the perfect picture. Given her age—two years older than her husband—Japanese social norms have even a name for this , “Ane Niyobe, or the older wife—she is expected to shape and mould her husband as he plods along in the public domain, a symbol of wifely devotion and love.

Unfortunately, the First Lady, did not go beyond such important tasks for herself and failed miserably when it came to questions on what she thinks women should do to acquire decent jobs in the male dominant job market and gain equal status in a country that remains, according to United Nations global Gender Inequality Index, in the thirteenth place. “ I understand the difficulties women face when it comes to handling a demanding career and home duties,” she told a journalist who asked for her observation on a recent trend among female university graduates who are opting to become full-time homemakers. “The life of a woman who stays at home is far less stressful than juggling a corporate career,” she explained even though she did add a comment that she found such attitudes among young women rather strange. Sitting next to me was a stunned Japanese friend and colleague who operates her own media training organization. “I am SO ashamed at what Ms Kan just said” she gasped, pointing out with indignation that the prime minister`s wife had deliberately ignored the enormous obstacles faced by women in the tightening career market. “ With no empathy or encouragement from the First Lady for women in Japan, what kind of changes can we expect?,” she complained.

To give the benefit of the doubt to Ms Kan whose husband gained political success based on the platform of his work for the citizen rights movement background, it is tempting to put rigid protocol as the underlying reason of her subdued and cautious comments before a daunting crowd of reporters, –she said it was her first experience. After all, Ms Kan, who arrived in a taxi that she paid for, is known to speak her mind in public so, perhaps, she was forewarned that being too outspoken with the press could endanger the political aspirations of her husband—a viewpoint she noted herself at the press luncheon. Still, such an attitude does smack of a crucial lost opportunity foir Japanese women who lack a prominent public role model. Given Ms Kan`s powerful position, a few more brave remarks towards boosting public awareness and lending support to improving women`s status, could have gone a long way.

But again, when Ms Kan declared energetically, ”NO” to another question about whether she would marry her husband again if she was reborn, explaining spiritedly it was simply because she thought repeating what she experienced already “was boring”, there was, finally, that hint of feistiness that she is known to harbour. In that flash of a second, Nobuko Kan showed her audience that, social norms notwithstanding, Japanese women are not without their deep-rooted desire for independence just like their counterparts in the world. Expect, of course, such sentiments are displayed Japanese style—not overtly but with stylish constraint.