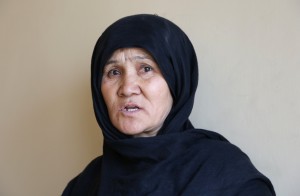 Rahima lived in Iran as a refugee for seven years. She returned to Kabul in 2007. Photo: Najibullah Musafer/Killid

Tens of thousands of families in Afghanistan are headed by women  – women who lost their husbands in the successive rounds of fighting that engulfed the country over the last four decades, having to single-handedly bring up their children. In this testimony, Rahima, who today works for Killid, recounts her family’s journey following the emergence of the Taliban in the late 1990s.

At the start of the war between the Taliban and mujahedin in 1996, Rahima lived with her family in Kabul’s Qala Jernail.

Emerging out of madrasas along Pakistan’s border with Afghanistan, the Taliban that year marched into Kabul and ousted mujahedin Ahmad Shah Massoud.

At the time, the mujahedin were in power under an agreement brokered between the different factions by the West after the collapse of the communist government of president Najibullah. But the agreement collapsed within months, leaving Kabul — which had survived the earlier years of war between the communists and the mujahedin – to be torn apart by rival guerrilla factions fighting for control over the city. In fact, the bloodshed was so terrible that Kabul residents welcomed the more disciplined Taliban fighters when they seized power and drove out the mujahedin.

But as history has shown that  relief was short-lived.

Rahima says her family had lived peacefully in Kabul until the war broke ou.Her husband was a daily wage worker and they had a good enough life.

As the Taleban fought their way into Kabul, there was an exodus of civilians from the city, but Rahima’s family could not leave, because her husband had been jailed. “[The Taliban] jailed my labourer husband, and took him away to Paghman,” she says. He was finally released because they could not find any reason to keep him.

The couple and their four children fled to safety to a village outside Mazar-e-Sharif called Babayadgar, where they lived for two years until the war caught up with them. The noise of rockets and rifles one night announced the arrival Taliban, eliminating anyone who crossed their path.

“They took my husband to a garden,” Rahima recalls of the day her husband was picked up. “We had no news of him for two days. Then we heard that a body was found in the garden — I went and identified it as his.”

Her husband gad been brutally tortured, his chin smashed with the butt of a rifle, his arms and legs broken.

Rahima brought her husband’s body home, washed and buried him with the help of neighbours. When she arrived back home, intruders forced their way into the house, burning everything.

The scared family fled into the desert until a modicum of calm had returned to the village. When they came back to their ruined home, Rahima had no money to buy even a bag of flour.

“The sky was far and the ground hard,” she says, reciting an Afghan proverb about the difficulty of the situation they faced.

A shopkeeper took pity on the family, and gave them loaves of bread to eat every night. But Rahima did not want to live only on charity. She made use of the relative security in Babayadgar to find work spinning cotton, sewing quilts and washing clothes – jobs that brought her small amounts of money.

The family succeeded in keeping hunger at bay, but the bitter cold of winter had to be endured. “We were putting on gloves and hats inside the house. Sometime we would put the lantern under the quilt to reduce the cold. We had no heater or stove to keep ourselves warm, and except God no one was there to help us in the city.”

In 2000 they made the journey back to Kabul. But faced with no prospect of work – women were not allowed to work under the Taliban – Rahima took the help of an “agent” to cross over into Iran with her children. She lived in Iran for seven years as a refugee, doing all kinds of work from washing carpets to factory jobs, to put her two daughters through school while her sons worked.

In 2007 she returned to Kabul having heard that the Karzai government was giving financial assistance to widows. She says she did not know that “such a fruit needs long hands to get”, meaning it was out of the reach of the poor. “We heard (in Iran) that Karzai was donating land to widows so we returned. When we came here we got no help from Karzai or the government.”

But luck was on her side in the form of new employment. Today, Rahima works in the office of the Killid Group where she is knows as “Aunt Fatima” and counted among its most hardworking and loyal staff.

*** Ali Arash writes for Killid, an independent Afghan media group in partnership with IPS. By distributing the testimonies of survivors of war through print and radio, Killid strives for greater public awareness about people’s hopes and claims for justice, reconciliation and peace across Afghanistan.