Warning: Creating default object from empty value in /home/gssn/public_html/ipsorg/blog/ips/wp-content/themes/platform/admin/class.options.metapanel.php on line 49
 On the Road to Elimination: 40 Years Fighting River Blindness | IPS Writers in the Blogosphere

What Does Iran Want in Iraq and Why? The Politics of Participation in Iran

On the Road to Elimination: 40 Years Fighting River Blindness

This week, at a summit organised by the World Bank’s Africa Region, we’ll be celebrating 40 years of one of the Bank’s first health projects and a highly successful public private partnership which is now treating up to 100 million people a year for river blindness (onchocerciasis).

Through the African Programme for Onchocercasis Control (APOC) and its predecessor, the Onchocerciasis Control Programme, the international community has been working to research and control this devastating disease.

I have seen for myself the impact of untreated river blindness. Whole communities have been blighted by debilitating skin conditions and threatened by blindness in early adulthood. Families have had to abandon fertile land by the rivers to escape the disease.

The village of Tienfala in Mali struggled for a number of years with more than 5,000 people leaving the village to escape the effects of river blindness, leaving it virtually deserted.

However this community has managed to rebuild itself through the collaboration between the Malian government and NGOs and I hope previous scenarios will never be seen again as we reach full scale-up of treatments to all communities in need.

Moving from control to elimination

When we started out, nobody dared imagine we would ever be looking at eliminating this disease completely. However, the evolution of partnerships and approaches over the last 40 years has allowed us to move towards such a place.

No one organisation or individual can claim that they have beaten the disease – but through partnership working we can. By harnessing and focusing the energies of communities, NGOs and the private sector we can bring them to bear in achieving better health outcomes all-round.

One of the main challenges in fighting river blindness has been getting the treatment to remote communities. This is why a community-centred approach is vital for success. Sightsavers was a pioneer of the community-based distribution system which uses trained village volunteers to give out treatment at a local level.

Community-Directed Distributors (CDDs), who know and are known by their communities, are best placed to decide when and where treatments take place. This empowers the community to take responsibility for the planning and management of efforts to combat river blindness.

With a network of a million CDDs, APOC and their partners have been able to reach communities at risk, consistently and for long enough periods, so that we’re at the stage where we can move from control to elimination.

A key contribution has been the donation of Mectizan®, used to treat river blindness, by global pharmaceutical company Merck and Co Inc. which is used to treat river blindness. This radically changed the control strategy from merely interrupting the spread of the disease to treating those already affected through mass distribution programmes. They have committed to donate as much of the treatment as needed, for as long as needed, until elimination.

Investment also needs to be made at country level in country data collecting to monitor the progress of the elimination drive. This requires the necessary training so people have the skills to test levels of the disease and confirm elimination project by project and country by country.

This approach is now widely used in multiple disease control programmes and adapted for other health and development activities – meeting the wider needs of communities, maximising health outcomes by integrating with other interventions and producing greater cost effectiveness.

Taking a coordinated approach in the treatment of river blindness alongside other diseases, such as lymphatic filariasis, soil transmitted helminths and schistosomiasis, means making the most of resources.

Through an integrated approach in 2012, CDDs delivered eleven other health interventions to over 47 million people in poor and remote rural communities in 10 countries.

In Uganda, Sightsavers and the health authorities used the working relationship built up through Mectizan® distribution to address eye health more generally.

To make the move from ‘control’ to ‘elimination’ we need to keep up the effort to sustain treatment at the required levels year on year and ensure the coverage levels of populations is such that we reach targets to prevent the disease returning.

Studies in Mali and Senegal were started after 12-15 years of Mectizan® distribution to determine whether the parasite could be eliminated. The first results have provided empirical evidence that this is feasible in some endemic areas in Africa.

In Uganda, after 13 years of treatment, there was a dramatic fall in the prevalence of carriers, from 71 percent to just 7 percent. The government has since started to implement an elimination strategy with twice yearly treatment.

Sightsavers has introduced a fast track initiative to support the elimination of the disease, where feasible, in 18 countries. The plan is ambitious but achievable and will lead to the elimination of transmission in most of our supported programmes by 2020. 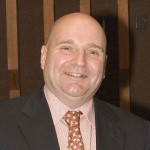 Simon Bush is the Director of Neglected Tropical Diseases at Sightsavers, based in Ghana. He leads on work on NTDs, particularly river blindness and trachoma. Sightsvers supported 103 million treatments for NTDs in 2013. Simon has chaired the NGDO NTD Network and the NGDO Coordination Group for Onchocerciasis Control.