Warning: Creating default object from empty value in /home/gssn/public_html/ipsorg/blog/ips/wp-content/themes/platform/admin/class.options.metapanel.php on line 49
 One Wedding, Many Funerals | IPS Writers in the Blogosphere

Recycling the “Friends of Hamas” Canard Against Chuck Hagel Drone Wars: Tactics in search of a strategy

One Wedding, Many Funerals 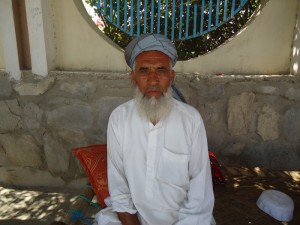 Aslam Khan (uncle Aslam) witnessed the Hada Massacre in 1984, one of the most brutal massacres in recent Afghan history.

Yasar Sharifi writes for Killid, an independent Afghan media group in partnership with IPS. By distributing the testimonies of survivors of war crimes through print and radio, Killid strives for greater public awareness about people’s hopes and claims for justice, reconciliation and peace.

For this testimony, Sharifi interviewed Wasel Khan, who relives the Hada massacre of 1984, one of the most brutal attacks on civilians in Afghan history.

The village of Hada in Nangarhar province had waited all year for Jahanzeb’s wedding in December 1984. Winter weddings are a time of celebration in snow-bound parts of the country.

Jahanzeb, a soldier in the Afghan army, had come home for the wedding. Everyone in the village in Behsood district was invited. People were attired in their best clothes and jewelry. Women and children had painted their hands with henna. Rugs covered every square inch of Jahanzeb’s home.

But fate had other plans, says Wasel Khan, a villager who survived the Hada massacre.

It was the fifth year of the government of Babrak Karmal, who had risen to power in December 1979 after the Soviet Union intervened in Afghanistan and killed his predecessor, Hafizullah Amin.

Khan recounts how Russian troops suddenly marched into the village in the evening of Jahanzeb’s wedding day. There was panic, he recalled. Within minutes the revelry had been replaced by screams, he said.

What followed  by the hands of the Russian army and air force were “crimes that cannot be described in words,” he said.

Hada village was targeted for being anti-government. But Khan insists not all the people were mujaheddin — most were only sympathisers, he says.

“Our village had 2,000 families before the Russian invasion. Most people fled but families from other areas had moved in. There were mujaheddin among them, he recounts. “A former villager informed the Russians that ours was a Russian-hating village. The wedding was seen as the perfect opportunity to cleanse the village.”

Khan says the informer, who he calls Mullah Sultan Jan, told the Soviet authorities that Hada was responsible for attacks on Jalalabad, nine kilometres from the village. But he insists it was the work of mujaheddin factions from Pachir and Chaparhar.

Soviet soldiers searched every house in the village, and took away 100 old and young men who were made to stand in two groups in a field.

“They were infidels, they had no mercy. They suddenly fired at the group on the left, killing many,” remembers a man called Uncle Aslam, standing next to Wasel Khan. “The injured writhed on the ground untill they died. There was a stream of blood.”

The group of men on the right, he said, were jailed for a few days, tortured and released.

Uncle Shaperai was amongst the prisoners. “They (the Russians) made us push tanks in the mud, and beat us. The day after I was released I left the country,” he said.

Soviet soldiers did not catch the prospective bridegroom, Jahanzeb, who proceeded to climb on top of the hill above the village and kill the remaining Russian soldiers who had lost their way in the chaos of the bloodbath.

Many Russian mothers lost their sons that day to Jahanzeb’s bullets, Khan adds.

In the end, a Soviet helicopter downed Jahanzeb. His body, which was cut in pieces, was carried to the village. His bride-to-be was eventually married to his brother, according to Afghan tradition.

“His mother had gone mad. There was so much sorrow,” says Khan weeping, a quarter century later.

The villagers were not able to bury their dead, he says, as the Russians had placed mines even in the graveyard.

A landmine blew up the vehicle of a villager called Amir Mohammad, who was coming from Jalalabad for the funeral, killing him and three others. Within hours a landmine had destroyed another jeep. “A tribal elder was among those who died. Only one woman survived,” he remembers.

Two days later, the village dead were buried in the nearby area of Karezo. “Now it is called graveyard of martyrs,” according to Khan.

Shamsul Rahman lost both of his parents in the Hada massacre, changing the path of his life drastically. If his dad had not been killed, he’s convinced he’d have gone to university in Afghanistan. Instead, “My uncle became our caretaker, and we had to migrate to Pakistan,” he says. “I did not attend school and I have been working as a labourer ever since.”