Lobe on Bibi to Biden, Graham and Atlantic Council The Daily Talking Points 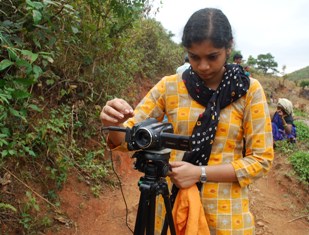 I work with media. I make documentaries. Thanks to all of the inputs I received from all of those consistent updates on climate change, I have been, and continue to be involved in making documentaries on Climate issues and solutions. Recently (November 2009), I was involved in making a film called ‘Climate Justice for All!’ – a film that recounts the testimonies of marginalized communities coping with climate change in the diverse eco-systems of India.

At the AMARC conference (Community Radio), I screened the film in a Workshop titled ‘Engendering Climate Change’. This concept was new for me. I hadn’t seen it earlier as a gendered process. As I watched the film, I saw that all the shots which featured physical work – both household and agricultural, were being done by women. This was completely unintentional. I was involved in the edit, and it was amazing how this unconscious selection made the truth so evident!

It is not an unknown fact that women work twice as hard as men in the rural areas. In the context of the climate change debate though where is she ? How will the marginalised woman cope with the changing climate? Will she have to go more hungry now that there is lesser food? Will she have to walk for longer hours to get water and firewood for her family?

The fight for people to take notice of alternative energy processes is on. These are technologies whose ownership does not lie with you and me, but with those utilising it – for those whom lighting is essential. Light; to be able to study at night, to have more time to cook food, to guard their fields from animals during harvest time, to walk in the night without getting bitten by a snake and share a joke with neighbours and friends. Social cohesion is something that we do not think is interlinked with technology. Or even being able to defecate in peace, in the dark – to keep away from prying eyes.

Now, Lingamma, aged 30 plus, who is from a remote village, Pathakota in the East Godavari District of Andhra Pradesh, India does have access to electricity because of a micro-hydro in her village. Padmawati, also from Pathakota has a smoke free cooking environment. Palala Pushpamma, 40+, from the village Pulusumamidi is grateful to have solar because though the Government given electricity poles are laid in her village, she has not received electricity for more than two days in total.

Technologies like solar, energy efficient stoves and micro-hydro, bring power to these marginalised communities rather than large projects that do more to destroy the environment and displace people. And most importantly, these are technologies that are harmonious to the culture of such communities.

Can it really happen? We believe it can, provided we have political will. Many organisations are already strategically working towards this. In the next few months till April 2011, we are going to document these processes so that they are not just weaved in rhetoric. Eight processes on alternative energy around India will be documented on paper and video such that it is demonstrated that another world is possible. thank you.