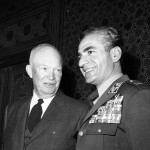 “The Father of Iran’s Nuclear Programme”

Last week the BBC’s “Today” programme carried an interview with Dr. Akbar Etemad, who was in charge of Iran’s fledgling nuclear program between 1974 and 1978 and who has lived outside Iran since the Revolution.

Dr. Etemad spoke frankly of the instructions he received from Shah [...]

BBC poll data indicates that 25% percent of Egyptian respondents view Iran favorably, nearly the same number as view U.S. influence as positive (26%). Nearly equal numbers of Turkish respondents approve of the influence of the U.S. (35%) and Iran (36%). Half of those polled, in countries long regarded as the staunchest Middle East allies of both the U.S. and of Israel–50% in Egypt, 49% in Turkey– expressed negativity about U.S. influence, with only 32% of Egyptians and 45% of Turks worried about Iran.

The group behind a string of Islamophobic documentaries is at it again: With just 48days to go until the release of “Iranium,” the Clarion Fund has kicked into high gear promoting its film about Iran. One bit of the effort is a blog launched on the movie’s website. It’s a slick effort replete [...]

In a sign of Iran’s desire to remain in the fold of the international community, Tehran dispatched a diplomat to attend a meeting of the so-called ‘international contact group’ of diplomats from countries with interests in Afghanistan. This is the first time Iran has joined the group of 44 nations.