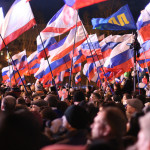 Russia moved to annex Crimea this week, as Ukraine evacuated most of its soldiers from the peninsula. Tensions in eastern Ukraine seem to have reached a tense equilibrium, even as reports of a Russian military build-up along its Ukrainian border raised the possibility of another incursion. 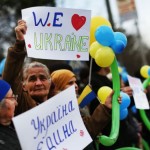 Russian forces are also conveniently located in Crimea, where a largely Russian populace (59 percent; Crimea was a part of Russia until 1954)—has so far welcomed the Russian forces. Twelve percent [...]