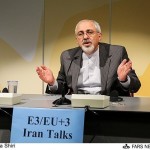 Give Iran Peace (Talks) a Chance?

Prominent neoconservative writers Bret Stephens and Reuel Marc Gerecht called for a much tougher approach to talks with Iran over its nuclear program in a debate hosted here by the McCain Institute on March 11, one week before talks aimed at a final deal between Iran and world powers [...]

The Truman National Security Project has created an interactive version of a war game with Iran. The goal is to highlight the costs of using the military option — financially massive and downright bad for US allies and forces in the region — on the Islamic Republic.