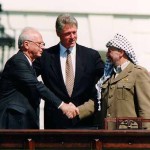 Oslo At 20: A Failed Process

After twenty years of futility, more and more people are coming around to the idea that the Oslo process has failed and that the basis of Israeli-Palestinian conflict resolution needs to be re-thought. Funny, there are those of us who have been saying that for years now. 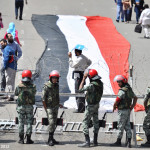 Neocons and Democracy: Egypt as a Case Study

If one thing has become clear in the wake of last week’s military coup d’etat against Egyptian President Mohamed Morsi, it’s that democracy promotion is not a core principle of neoconservatism. Unlike protecting Israeli security and preserving its military superiority over any and all possible regional challenges (which is [...]

Hawks Warn that Iran hyperinflation no cause for US celebration (yet)

Commentary magazine’s Jonathan Tobin warns the Obama Administration that it should not chalk up Iranian hyperinflation (the rial fell to 35,000:1 against the US dollar this week) and the outbreak of bazaar protests over the situation as a sign of success in forcing the Islamic Republic to abandon its [...]

Over at The New Republic, Marc Tracy asks the question “Is it possible to write critically about Sheldon Adelson without being anti-Semitic?” He answers in the affirmative, noting that Adelson’s enormous financial influence on this year’s presidential election cycle — combined with various credible allegations of misconduct, most notably [...]

News and views on U.S.-Iran relations for January 12:

Tablet Magazine: Hudson Institute Visiting Fellow Lee Smith writes, “Arabs are not winning an information war against Israel, nor anything else for that matter. Rather, the stories and lies they tell to delegitimize the Jewish state are part and parcel of the war [...]

News and views on U.S.-Iran relations for January 5 to January 7:

The Washington Post: Jennifer Rubin, writing on her Right Turn blog, asks whether India is doing enough to enforce sanctions against Iran. Rubin, picking up on The Wall Street Journal’s reporting, writes, “The revelation that the government of India ‘advised [...]

Commentary: Jonathan Tobin writes on Commentary’s Contentions blog that the Obama administration has fallen for the Iranian’s ploy of practicing “Fabian diplomacy in which they play upon the West’s belief in negotiations with endless delays.” According to Tobin, the administration’s position that the West [...]

Weekly Standard: Michael Weiss attacks the concept of ‘linkage‘ in a long, convoluted piece on the Standard‘s blog. Leading off with an overstatement explanation of linkage (“by resolving the Arab-Israeli conflict most other problems will be resolved”), Weiss goes on to [...]

Iranian President Mahmoud Ahmadinejad’s trip to Lebanon this week has produced much teeth gnashing by Iran-hawks who note that Hezbollah’s ties to Iran and see Ahmadinejad’s upcoming outing to the Lebanon-Israel border as a grave provocation.

Reza Kahlili, a former CIA spy in the Iranian Revolutionary Guard who writes in hawkish publications under a pseudonym, [...]

Thus, just when it seemed as if he were making some real progress [...]