Warning: Creating default object from empty value in /home/gssn/public_html/ipsorg/blog/ips/wp-content/themes/platform/admin/class.options.metapanel.php on line 49
 Meet the Press | IPS Writers in the Blogosphere 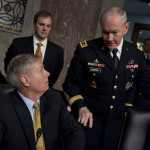 They say “everybody’s a critic,” and they’re right. Who wouldn’t want to be a critic? Not only is criticism important, but being a critic can be fun and easy. The Greek historian Plutarch once wrote, “It is a thing of no great difficulty to raise objections against another man’s [...]

With the widely touted shift in the public opinion polls after the first presidential debate, Mitt Romney is no longer an underdog. That being the case, his pronouncements are attracting some well-deserved scrutiny from mainstream media sources. Romney’s major foreign policy speech at the Virginia Military Institute on Oct. 8 [...]

“President Obama and the bipartisan, bicameral congressional leadership, have deepened America’s support for Israel in difficult times”: In what multiple outlets have deemed a “rare” statement, the American Israel Public Affairs Committee (AIPAC) issued a press release on Sunday praising the Obama Administration – as well as both Congressional Republicans [...]

Herman Cain: ‘I’m Not Familiar With The Neoconservative Movement’