Warning: Creating default object from empty value in /home/gssn/public_html/ipsorg/blog/ips/wp-content/themes/platform/admin/class.options.metapanel.php on line 49
 The Importance of Triangular Co-operation and Inclusive Partnerships | IPS Writers in the Blogosphere

The Importance of Triangular Co-operation and Inclusive Partnerships

The international community witnessed a number of natural disasters in 2013.  Typhoon Haiyan, which hit the Philippines in November, caused extensive damage with about 8,000 people dead or missing and more than 16 million affected. Other countries, including India and Mexico, were also severely damaged by typhoons and hurricanes in 2013. The Solomon Islands, China, and the Philippines were struck by massive earthquakes. Many precious lives were lost and long years of development efforts were destroyed by these natural disasters.

Knowledge and experience sharing, along with triangular co-operation, discussed in the session at the High-level Meeting of the Global Partnership for Effective Co-operation in Mexico City in April, 2014, are valuable tools for promoting human security and establishing societies resilient against natural disasters. 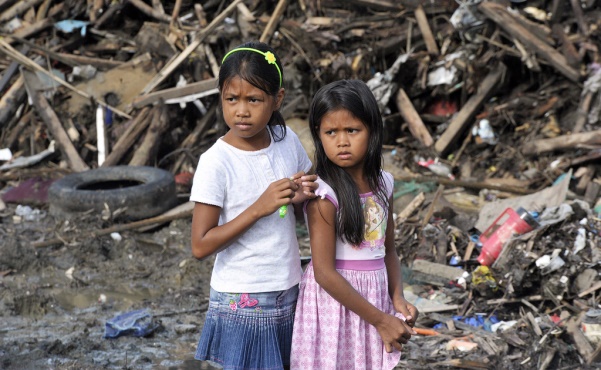 “Two girls from Tacloban City, in the Leyte Province of the Philippines, stand in front of some of the damage and debris left by the storm.” UN Photo/Evan Schneider 21 December 2013.

Here is one example from Japan on how these tools can be used. In March, 2011, an unprecedented massive earthquake and tsunami struck our country, resulting in approximately 20,000 dead or missing, 130,000 collapsed houses, and 470,000 evacuees in the aftermath of the earthquake.

But in that catastrophic situation there was no damage to homes in a small coastal village in Iwate Prefecture, despite this being the highest tsunami run-up ever to hit this area: 40 metres above sea level. Why? This village had been hit by a tsunami in 1933, and had kept a record of damages and lessons learned on a stone monument as a way of sharing wisdom on where to build houses to prevent damage by future tsunamis. This knowledge-sharing saved many lives 80 years later.

Though this is just one example of knowledge-sharing across generations in a small village, Japan’s experience demonstrates that a country’s sharing of its knowledge and experience can save precious lives elsewhere. Japan has, tragically, confronted various natural disasters. We are sharing our knowledge and experience through opportunities such as the Third UN World Conference on Disaster Risk Reduction to be held in Sendai, Japan, on 14-18 March, 2015.

Japan is also using triangular co-operation to reduce the risk of disasters. Japan initiated a project to construct Mexico’s National Center for Prevention of Disasters (CENAPRED) and offered grant aid and technical assistance to develop the country’s capacity after Mexico’s massive earthquake in 1985. Through the efforts of both countries, CENAPRED is now a disaster management hub for Latin America and the Caribbean to promote disaster-prevention measures, such as earthquake-resistant infrastructure, earthquake observation, and citizen safety.

Following the earthquake in El Salvador in 2001, Japan and Mexico launched a joint project to establish and promote an earthquake-resistant housing construction model through grant aid and technical co-operation provided by Japan. This project leveraged the strengths and experiences of both Japan and Mexico to maximise development effectiveness. Japan provided equipment and technical experts, including on earthquake-resistant construction, while Mexico sent technical experts to support the effective application of the technology based on their own knowledge, as well as their experiences working with Japan.

As well as knowledge and experience sharing and South-South co-operation, the Global Partnership meeting in Mexico also highlighted the importance of partnerships with the private sector to address diversifying development challenges. To achieve sustainable growth, it is necessary to create a virtuous cycle through infrastructure development, using ODA to leverage private investment, create jobs, and raise income standards, to attract further investment.

A people-centred perspective is essential when promoting private investment in developing countries. This includes having as many people as possible enjoy the economic benefits of investment; enhancing social resilience to economic fluctuations, climate change, and natural disasters through investment; and advancing local people’s capacity to promote investment.

Last but not least, Japan is currently revising its ODA Charter. It aims to promote Japan’s development co-operation more effectively by building upon the global discussion on the post-2015 development agenda and through the growing diversification of ODA’s role. In revising the Charter, we would like to stress the importance of strengthening partnerships with various development partners in order to maximise development effectiveness. This is a common principle underpinning both Japan’s ODA and the Global Partnership.

An inclusive partnership among various development actors is indispensable for addressing development issues looking ahead to post-2015. I sincerely hope that the Global Partnership will continue to play a crucial role in further strengthening this alliance.

Seiji Kihara is Parliamentary Vice-Minister for Foreign Affairs of Japan, and is serving a second term as a member of the House of Representatives. Prior to that, he worked for the Ministry of Finance for 11 years, including a secondment at HM Treasury, U.K. He headed a Japanese delegation for the First High-level Meeting of the Global Partnership for Effective Co-operation in Mexico City in April, 2014.