The United Nations Wednesday marked the first anniversary of the adoption of the Arms Trade Treaty (ATT). Nine months after the treaty was opened for signature, a group of 18 countries have jointly deposited their instruments of ratification.

“We must not forget the difference this treaty will make, if well implemented, for the lives of so many,” said UN Deputy Secretary-General Jan Eliasson. 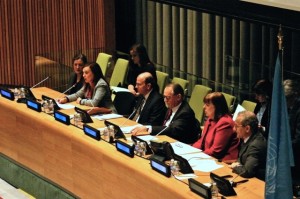 Adopted by the UN General Assembly by a 154-to-three votes in April 2013, the ATT is a multilateral treaty regulating the 85 billion dollar annual  international trade in conventional weapons.

To date, the agreement has been signed by 118 member states, but 50 ratifications are still required for entry into force.

Eliasson warned that civilians are still being killed and driven from their homelands, as weapons and ammunition remain in the hands of human right abusers and terrorists. According to Amnesty International, 500,000 civilian lives are lost each year in armed conflicts.

“Every day, we witness the human cost of the irresponsible transfer of weapons,” he added. He also highlighted that “good things can be achieved when governments and civil society work together through the United Nations.”

In a statement Wednesday, UN Secretary-General, Ban Ki-moon encouraged all other States to sign and ratify the ATT “without delay.”

He also called on States, civil society, and international and regional organisations “to continue working together to ensure the ATT can play its full role, in helping to reduce needless human suffering and build a safer world for all.”

“No-where is the need for an effective treaty so apparent as in the devastating humanitarian crisis in Syria,” stressed Anna Macdonald, on behalf of the Control Arms Coalition.

War in Syria has killed over 150,000 people and over nine million are in dire need of humanitarian aid.

The conflict has been fuelled by transfers of arms, munitions and ammunition from outside parties. From 2000 to 2010, it is estimated that Russia sold around 1.5 billion dollars worth of arms to Syria, making Damascus Moscow’s seventh-largest client.

Today, the United States is responsible for more than 30 percent of global arms sales. The ATT has been criticised specifically by the National Rifle Association (NRA), the biggest single arms lobby in the country..

The NRA’s campaign is based on the right to bear arms, which is protected by the Second Amendment to the US Constitution.

Opposition to the treaty also came from some member states and civil society groups. During negotiations, several countries such as Cuba, Venezuela, Egypt and Iran held strong concerns about the implications of the ATT for national sovereignty.

Many African countries consider the treaty would not be efficient without any restrictions on the ammunition trade. A 2012 Conflict Armament Research reports that ammunition being delivered by Iran is used in 14 African countries; among them, only four are used by governmental forces.

Within the 18 countries, France and the United Kingdom ratified the treaty at the ceremony on Wednesday.

“It is extremely positive that five of the world’s biggest arms exporters are among those ratifying today,” Macdonald said.  She also emphasised the need for governments to implement the ATT very seriously.

“This is a treaty about saving lives. It will require changes in legislation, and it must achieve changes in behaviour,” she added.

The Director and Deputy to the High Representative for Disarmament Affairs, Virginia Gamba, said the ATT could enter into force in the second half of this year.

Jonathan Rozen is a trainee at the United Nations office of IPS.