Warning: Creating default object from empty value in /home/gssn/public_html/ipsorg/blog/ips/wp-content/themes/platform/admin/class.options.metapanel.php on line 49
 Why we must transform social norms to achieve real gender equality | IPS Writers in the Blogosphere

Why we must transform social norms to achieve real gender equality 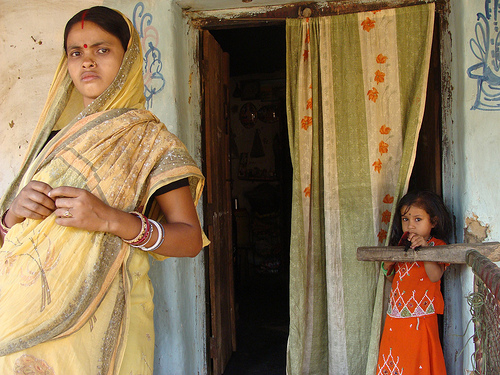 A pregnant mother and her daughter in the rural Purulia district of West Bengal state in Eastern India struggle against the country’s “son preference”. Credit: Sujoy Dhar/IPS

What is holding back women and girls from reaching their full potential? Social institutions – defined as laws, social norms and practices – play a powerful but often invisible role in determining women and girls’ access to opportunities, resources and power. A girl who is forced to marry early and then begins child rearing is not likely to finish her education, which then limits her employment opportunities. Her lower status in the family, which may be enshrined in national law, will not only affect her own well-being but also that of her children. If she is in an abusive relationship, she will have limited access to economic resources inside the household and her ability to make decisions about her children’s well-being will be diminished. If the bank then requires her husband’s permission to take out a loan or open a bank account she will not be able to start a small business.

The OECD Development Centre’s 2012 Social Institutions and Gender Index (SIGI) provides a stock-take of where countries currently stand on discrimination against women. While other measures of gender inequality tell us about gender gaps in education or employment, the SIGI focuses instead on what drives those gaps, such as women’s status in the family, gender-based violence and restrictions on the right to own land and property.

The results of the 2012 SIGI show that while there has been promising progress in some aspects of discrimination against women, there is still much more to be done. Areas of progress include the introduction of laws to combat domestic violence, an overall decline in early marriage and some countries showing improvement with respect to missing women. Certain forms of discrimination against women remain widespread. Out of 121 countries covered in the 2012 SIGI, 86 have discriminatory inheritance practices or laws. It is clear that laws are not enough to change attitudes – on average, for countries ranked in the SIGI, around half of women believe domestic violence is justified in certain circumstances. The preference for sons over daughters – a particularly grave form of discrimination – remains evident in South Asia, Central Asia and South-East Asia.

Latin America is the top-ranking region in the 2012 rankings, with strong legal frameworks to promote gender equality in the family and an increasing number of laws to combat violence against women. The region has the highest share of women in parliament among developing countries: in 2011, 20% of parliamentarians were women and 12 countries in the region currently have quotas to promote women’s representation in national governments.

Sub-Saharan Africa and Middle East and North Africa show the highest levels of discrimination against women and girls. Many countries have discriminatory laws in relation to marriage and property rights or do not have adequate protection against gender-based violence. Over 75% of women in Guinea, Ethiopia, Somalia, Congo, the Democratic Republic of Congo and Mali agree that domestic violence is justified in some circumstances.  However, there is reason to be optimistic. In Rwanda and South Africa, for example, the introduction of political quotas has led to a greater representation of women in politics. In Morocco, reforms to the Family Code have granted women equal rights in marriage and the country has also introduced quotas to boost women’s political representation.

One salient finding of the 2012 SIGI is that several bottom-ranking countries are affected by conflict, fragility and insecurity. This highlights the urgent need for gender to be a top priority in peace building and conflict prevention efforts, particularly given that no fragile state has achieved a single MDG. Moreover, the SIGI findings for countries such as Nepal and Rwanda highlight that post-conflict settings are also opportunities to transform social norms through the introduction of gender equality reforms and programmes. Women in Nepal gained 33% of the seats in the 2008 Constituent Assembly elections, an unprecedented achievement for Nepal and South Asia at large. Rwanda, for instance, has introduced comprehensive laws on violence against women.

The 2012 SIGI data also shows that high levels of discrimination against women is related to poor development outcomes in areas such as education, women’s employment, child mortality and maternal mortality. It is evident the human and economic costs of not acting on discrimination against women are significant. To achieve lasting change, policies and programmes must go beyond quick-fixes and tackle the deep-seated social norms which are the root cause of gender inequalities. Transforming social norms must be a priority for policy-makers and donors to enable women and girls to fulfill their aspirations and contribute to their communities and economies.