From the Department of Unintended Irony PNAC Revisited 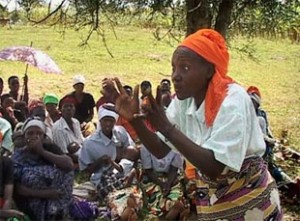 This is the theme of “My neighbour, my killer”, a film about Rwanda’s extraordinary attempt at reconciliation. This documentary by Anne Aghion, which premiered in New York two weeks ago at the Human Rights Watch film festival, follows a gacaca or community court during five years.

Rwanda has set up some 12, 000 gacaca where killers face the relatives of those they killed during the genocide in 1994. (Read an interview with Aghion here).

A world and an age away, the same questions emerge in “Katyn”, the magnificent, sombre and sober epic movie made in 2008 by Polish director Andrzej Wajda about the Soviet massacre of 20,000 Poles during World War 2.  During the ensuing five decades of occupation of Poland, the Soviets falsified history in a web of institutional lies and blamed the Nazis for the mass murders.

Both films are meditations on memory and history and their distortions, on loss, cruelty and forgiving, on imperfect justice, atonement and healing.

Women are central to both films – they are witness to horror and keepers of memory.

Think of the Madres de Plaza de Mayo haunting the Argentine junta with the photographs of their disappeared sons and daughters in the 1980s.

At truth and reconciliation commissions across the world, the bulk of testimonies by women dwell more on their loved ones and less on their own sufferings.

This is changing, as truth commissions become more gender-aware and seek gendered narratives. Earlier commissions, such as Argentina and Chile, were gender-neutral (some say gender-blind). South Africa was gender-neutral in its mandate but had special hearings for women. Peru’ commission had a gender unit. Later ones, like Haiti, Sierra Leone and Timor Leste, have looked specifically at sexual violence.

A third film that I saw recently is “Persepolis”, Marjane Satrapi’s wildly popular graphic novel turned animated movie, about her life growing up as a girl who likes Michael Jackson and punk music under the ayatollahs in Iran in the 1980s. 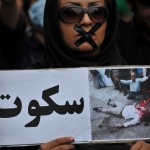 The movie conveys a poignant description of another form of gender abuse: the repression of women’s freedom to dress, move about, work, study, divorce, inherit, love and have fun.

Repressed, but not cowed into submission: as I write, on the streets across Iran, women are protesting, being beaten up, arrested and killed, challenging theocracy, demanding their rights.

(Read about women protesters in Iran and about dismantling a culture of impunity in Guatemala, Peru and Democratic Republic of Congo)