Warning: Creating default object from empty value in /home/gssn/public_html/ipsorg/blog/ips/wp-content/themes/platform/admin/class.options.metapanel.php on line 49
 A spiritual gift | IPS Writers in the Blogosphere 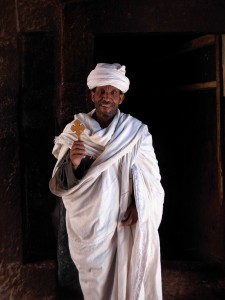 Patriarchal in all senses. By M. Sayagues

What drives a 17-year-old girl to enter a monastery? Today she is 30, and still happy about her choice. Her eyes sparkle and her laughter comes easy. She exudes peace.

I will call her Gabra (gift, in Amharic), for our conversation was private. I met her at a monastery near Lalibela, the mystical city of rock-hewn churches in northern Ethiopia.

Monastic life has a long tradition and prestige in the Ethiopian Orthodox Church. The oldest monastery dates from the 6th century. A monastic renaissance between the 13th and 16th century brought great moral and political authority to clergy. 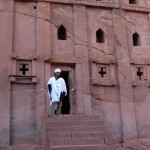 Gabra’s rock-hewn monastery dates from the 12th century. Her room is excavated in the pink tufa rock. Two built-in-the-rock platforms, covered with a thin mattress, do as couch and bed. An old cupboard holds a few plates and cooking utensils, three of the long green robes worn by Ethiopian peasants, the white headscarves that nuns wear, and two pairs of sandals.

For income, she and her fellow nuns weave cotton and silk into diaphanous shawls, sold at the monastery. She rises before dawn to pray – the first of daily seven prayers. Her ambition is to study theology in Addis Ababa or in Lalibela.

Gabra is not completely cut off from the world. She has a cellphone and a radio. On Sundays, relatives and friends visit.
Choices

I ask her if marriage and children ever interested her.

“It is a privilege to be single and not to have children,” she says softly, smiling but firmly. She sounds relieved.

Unmarried myself, I agree that motherhood and marriage are just one option. I understand the spiritual call, the peace of contemplation and withdrawal, of a simple lifestyle unencumbered by material things.

Yet I wonder if female genital mutilation had to do with her decision.

In Ethiopia’s eastern region, a girl might suffer genital cutting between the age of 15-17, before marriage. Her clitoris would be cut, sometimes the labia. 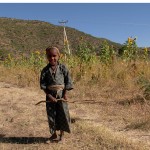 She has a right to her bodily integrity.

In Somali region, she would have infibulation at a younger age: the complete removal of her genitalia and, to preserve virginity, being stitched shut with an acacia thorn, leaving only a hole to urinate.

About three-quarters of women in Ethiopia between 15-49 have suffered some form of genital mutilation, said a government survey of 2005. The practice is fading – but too slowly, say activists.

It is not called mutilation for nothing. Sex and childbirth will be extremely painful and dangerous.

If finding a husband means suffering genital cutting, a hard mattress in a rock-hewn room is a much better place than a king-size wedding bed.

Gabra did not speak English, my male guide spoke little, and sex topics are taboo in Ethiopia, so the conversation went in another direction. Gabra was curious about my life, my work, and my daughter. 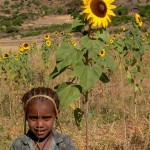 “Would you want to live like me?” she asked. “I don’t think I could,” I said. “But I feel the beauty of this simplicity.” She smiled.

Ethiopia looks and feels ancient and spiritual.  Social cohesion is remarkable. But the same lifestyle that makes ferenji (foreigner, in Amharic) wax lyrical about the “biblical landscape and people” binds women to painful and dangerous traditions.

Some traditions are simply annoying. Women cannot join the rites if they are menstruating, ergo unclean. At no time of the month can women, local or foreign, enter the most sacred chapel of the Lalibela complex, Bete Mikael, where King Lalibela is buried. We are only allowed a glimpse from the door. In some monasteries, no females, including of the animal kingdom, are allowed.

Monastery visitors take leave at 5 PM (international time; in Ethiopian time, 11 in the night). I make my way down the stony path, the tufa rock glowing pink and gold in the sunset.

I am thinking that the monastery – the spiritual world – may be a blessed refuge from the hardship of being born female in a deeply patriarchal world.