Aluf Benn: “The world doesn’t seem so worried by Netanyahu’s threats to strike Iran” What to Make of the latest Iranian-Turkish Row 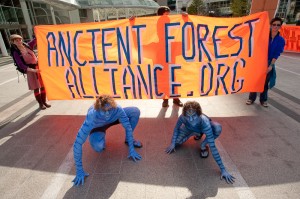 Ancient Forest Alliance supporters dressed up as Na’vi characters from the movie Avatar and rallied in Vancouver, BC for the protection of the province’s endangered old-growth forests.

The recent photo confirmation of ‘uncontacted’ peoples in the southeast Peruvian Amazon has captivated the media gaze with images of people naked but for red paint shooting at a plane with arrows.

The Mascho-Piro, uncontacted peoples, or better put people who live in voluntary isolation, capture the imagination of a public enticed by the story-like quality of otherworldly beings not so distant from the “Red Indians” of Wild West films or the uncontacted alien tribes from the film Avatar.

Sheila Aikman, a lecturer in education and development at the University of East Anglia, whose research interests lie in intercultural education and the indigenous movement, tells me that the extensive coverage has positive aspects, bringing the challenges faced by the Mascho-Piro from resource exploitation and encroaching tourism starkly into view.

This includes the devastating effects of unregulated gold-mining in the Madre de Dios, alongside reporting of a proposed highway planned by the Peruvian government between the towns of Inapari and Puerto Esperanza cutting through exactly the region where Mascho-Piro groups live.

But what escapes the media gaze is that incidents such as unregulated gold-mining are not new or one-off but “embedded in a long history of struggle against neoliberal development programmes, unregulated resources exploitation, and under-regulated multinational hydrocarbon extraction,” Aikman says.

Pointing to a recent headline in the UK newspaper The Observer: “New Amazon highway ‘would put Peru’s last lost tribes at risk”, Aikman voiced her concern that reports have sought to hold the attention of their audience through appealing to stereotyped images of indigenous peoples.

However, adding to the complexity of the issue, Aikman told me, “Indigenous representative organisations are themselves drawing on images from the blockbuster film Avatar to garner attention and understanding of the life-threatening dimensions of the pressures they are facing.

“Indigenous organisations are playing on the stereotyped image of ‘other’ as a strategy to reach out to the many millions who have seen this film and make them aware of the parallels in terms of the despoiling of indigenous peoples territory, their social and spiritual lives, and abusing their rights in the name of destructive resource extraction and economic profit,” she said.

In Avatar, the indigenous Na’vi people fight to save their land and traditional way of living on the planet Pandora from human beings who want to destroy it to extract minerals to fuel Earth’s energy supply.

At a screening of the film for a group of indigenous leaders from the Ecuadorian Amazon, one Achuar elder comments, in Public Radio International video footage of the event, that the emphasis on war detracts from the path of dialogue, which the Achuar have adopted in the struggle for their rights, and suggests the film incorporate a more peaceful message.

James Cameron, the director of the film, has taken heed of the criticism, commenting in an interview that he “has altered the story somewhat” for the sequel.

Other members of the Achuar voiced the hope that the movie would attract the public’s attention to their own struggle, as they try to sue Texaco for illegal dumping practices in their region.

Palestinians on the West Bank have also used the analogy to draw attention to their plight, dressing up like blue Na’vi people and capturing footage of protests on the streets of Bilin against Israeli occupation and the ongoing construction of a separation barrier in their town.

The recent annual report of the Minority Rights Group titled “State of the World’s Minorities and Indigenous Peoples 2012″ illustrates the parallels between the fictional film and the realities facing indigenous peoples, reflecting the urgent need to draw attention to such issues.

The report provides concrete evidence of how the generation of vast revenues by government-sponsored projects from logging and dams to mineral and oil extraction are too often at the expense of the rights of indigenous peoples.

Harsh realities explain in part the use of simple messages to foster public support. But such tactics run contrary to indigenous demands to stamp out stereotypes in the mainstream media, which crystallise misconceptions about indigenous peoples and grossly narrow public understanding of indigenous issues.

Speaking at the OURMedia annual conference in Porto Alegre, Brazil in 2004, Guambiano leader Jeremías Tunubalá was vehement in his condemnation of the stereotyping of indigenous peoples.

“Through the folklorisation, the exoticisation and the banalisation of indigenous people, the media normalise and sanction exclusion and erase differences among various indigenous cultures,” he said.

On the subject of representations associating indigenous peoples with violence, he said, “This type of coverage ignores the legitimacy of indigenous demands, the long-term dimension of indigenous struggles, and the complexity of indigenous mobilisations.”

Aikman puts the use of Hollywood stereotypes by indigenous representatives in a broader context of enduring struggles and global advocacy strategies.

It is crucial to recognise that “Local, regional and national indigenous organisations have been working with global networks and international NGOs to get attention for issues that they have been working and struggling with– issues which have been devastating indigenous peoples’ lives for many years,” she said.

Giving the example of the Federation of Natives of Madre de Dios (FENAMAD) established in 1984 in South East Peru, Aikman points to the 30-year struggle of the organisation to lobby for respect for indigenous lands, for legal and environmental protection and for the recognition of uncontacted peoples and their legal protection from “development”.

FENAMAD is capitalising on recent media attention “using its sophisticated website and wide and active networks to prompt response from not only Peruvian society in defence of indigenous rights but globally as part of a globalised network of indigenous and non-indigenous organisations,” Aikman explained.

“It seems that only now these issues have reached a point at which they have been able to capture a wider audience and demand attention,” Aikman said.