Warning: Creating default object from empty value in /home/gssn/public_html/ipsorg/blog/ips/wp-content/themes/platform/admin/class.options.metapanel.php on line 49
 Can u Talk? Cellphones and Girls in South Africa | IPS Writers in the Blogosphere

Can u Talk? Cellphones and Girls in South Africa 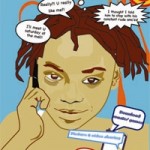 There has been phenomenal growth in the cellphone industry in Africa. It is clear this technology is essential in a continent with failing land line telephony infrastructure and development.

The opportunities for development that have resulted from this growth is clear. Cellphones are used to communicate HIV information, send market prices to rural small farmers and to collect data in rural health care.

Africa, like the rest of the world, is also marked with the consequences of gender inequality, where violence against women a commonplace. It is in this context that many mobile phone development projects are being implemented.

Women’sNet is a non-profit organisation in South Africa that uses information and communication technologies (ICTs) for women’s development. Women’sNet has also been thinking about, and using, mobile phones in our work.

We have worked with a Ugandan women’s organisation to share information via SMS about ending violence against women, and we have undertaken research in the area of cellphones for HIV/AIDS communication.

We recently asked a group of young South Africans from an informal settlement in Gauteng province about their use of cellphones. We were interested in the potential that cellphones offer for communicating social change messages, and also in the potential for creating positive social networks for young people.

Positive social networking spaces have been shown to decrease the risk of young people contracting HIV.

What we found was unsurprising. Young women use cellphones differently to young men, and virtual spaces reflect their real lives. In South Africa young women are six times more likely than young men to be HIV positive. Young women also face very high levels of violence, intimidation and sexual harassment at home and on the streets.

The young women we interviewed were secretive and hesitant when talking about their use of cellphones and cellphone services such as MXit. The girls talked about intimidation, sexism and ‘feeling uncomfortable’.The young men we spoke to were confident and outspoken. They spoke about dating ‘chicks’ and ‘beauties’.

What does this mean? As in real life, our projects using cellphones must be planned, implemented and evaluated from a gender perspective. Virtual spaces, like any other space, must challenge gender stereotypes, address violence and intimidation where it happens, and empower young men and women to challenge inequality.

Women’sNet, through it’s Girls’Net programme launched a new campaign called “Keep your Chats Exactly That!”. Our campaign aims to help parents, children and teachers to use cellphone technologies positively. We aim to ensure young people in South Africa are able to fully benefit from cellphone technologies and the development opportunities they offer.

Our campaign kicked off in Gauteng, with support from UNIFEM, and our plans are to expand it to other provinces. This campaign contributes to our work to ensure ICTs work for gender equality and aims to add to the collective knowledge about technologies as they are used by girls and women.

Contact Eva Ramokobala for more information or to participate in the campaign: eva@womensnet.org.za