Warning: Creating default object from empty value in /home/gssn/public_html/ipsorg/blog/ips/wp-content/themes/platform/admin/class.options.metapanel.php on line 49
 Europe’s Future has Been Captured – It’s Time to Fight Back | IPS Writers in the Blogosphere

The awakening of the ghost of nationalism is at length the result of a double failure of the European Union and its leadership. The financial crisis and the immigration crisis that hit Europe during the last decade have proven the unsteadiness of the unification project. In both cases, European leaders’ capitulation to business elites’ interests led them to flawed responses — eventually turning the Union into a battleground where national political agendas of member states are played off against each other. 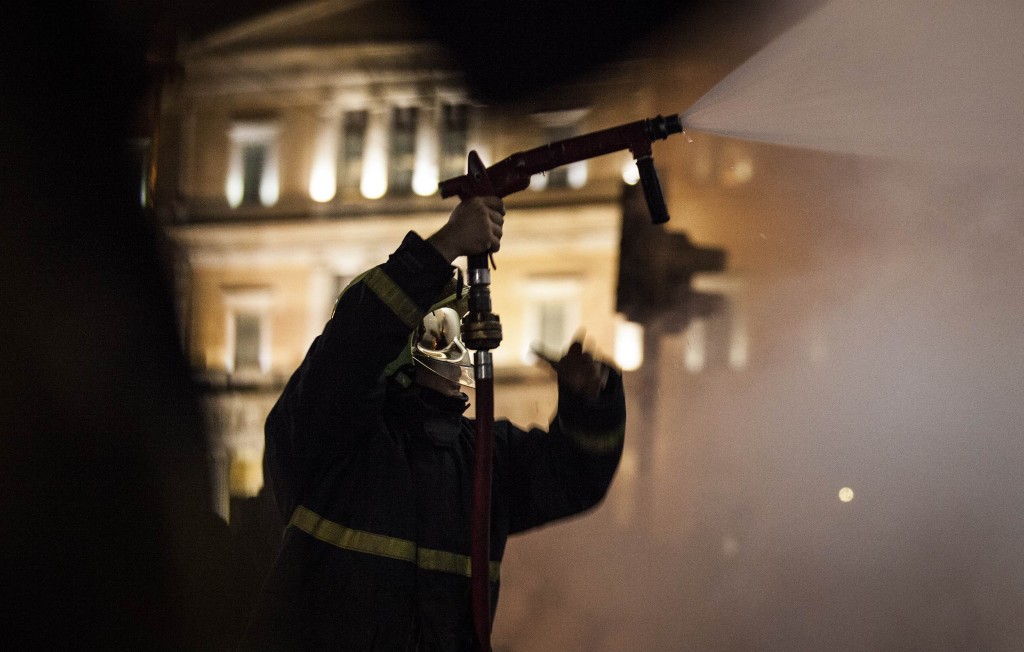 In its handling of the financial and immigration crises, EU leadership has repeated historical mistakes, surrendered democratic functions to turbo-capitalism and unlocked the door to authoritarianism. Photo Credit: Apostolis Fotiadis

But the elites’ commitment to democracy is not very sincere. They mostly remember it when the interests they represent are under threat. In a case in point, last month the German Finance Minister Wolfgang Schäuble started leaking versions of rescue strategies about the future of the Greek bailout program, hoping to find a new balance between additional rescue money and austerity obligations that the overburdened Greek public would have to digest.

In this way, Schäuble hopes to rescue the Greek pro-austerity coalition government from the likely beating in the municipal and European elections next May. To put it in a simpler way, his problem is that democracy might work and drive things out of control. Thus, he is hurrying to exercise preventive measures for a possible derailment of his strategy.

Schäuble’s last example of strategic thinking is the embodiment of the nature of European politics since the beginning of the debt crisis in 2009. It is also the kind of thinking that has failed Europe.

The immigration crisis that’s been evolving since the end of the 1990s on the borders of Europe has also degenerated to brinkmanship between southeastern and northwestern member states.

When xenophobia dominated the debate on migration, instead of a humane immigration system with regular controls, European leaders away from any kind of public scrutiny chose to build a xenophobic high-tech fortress. A project promoted by the emerging security-industrial complex which today actively co-dictates European immigration policy.

In both cases, there were other ways to go. The Eurobond or a controlled debt restructuring were serious options that would have changed the course of the eurozone crisis from very early on. With the correct political navigation, they could  have also deepened the European project politically.

The Dublin regulation was created in 1997 to identify the country liable to accept and consider an asylum application; The Common European Asylum System that outlines common high standards and stronger co-operation to ensure that asylum seekers are treated equally in an open and fair system was put on paper in 1999. Instead of utilising these further to create a just burden-distribution system, member states came up with an externalisation mechanism that pushed responsibility to others.

Now, at the peak of the crisis, Europe’s technocrats react again like political dwarves. To defend the future they have chosen for Europe, they will flirt with the monster. They watch as Greece begins to turn into an authoritarian state where journalists are persecuted and racist neo-nazis have been offered appalling impunity, only because its government keeps up with fiscal consolidation.

During the boom years, European leaders promised that if we all run faster away from our history, unconditional and unlimited progress would wait for us around the corner.

What we managed instead was to start repeating Europe’s historical mistakes, surrender democratic functions to turbo-capitalism and unlock the door to authoritarianism.

Europe’ future has been captured by some who pay lip service to its vision while they do business for themselves and their patrons. The negotiation for the Transatlantic Trade and Investment Partnership between Europe and the US, cloaked in secrecy and aimed at lifting any barriers to the corporate domination of both markets, epitomizes this evolution.

Nevertheless, we shouldn’t destroy Europe and give in to nationalism because of them; we should fight to recapture it and reinstitute its purpose: peace and dignity.

Apostolis Fotiadis is a freelance correspondent based in Athens with a focus on ethnic conflict, human rights and the politics of immigration and the economic crisis in Europe. You can find him on his website and on twitter at @Balkanizator.