The Missing Guest from the 2007 Bahamas Conference Getting the UN into GEAR! 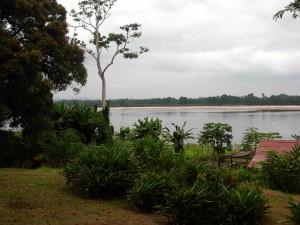 I decided to visit my Nicaraguan friend who stays in a village called Fougamou, in central Gabon. So I looked up the nearest town,  Lambaréné. It turned out to have a museum honouring Dr. Albert Schweitzer, who arrived there in 1913, built a hospital, and won a Nobel Peace Prize in 1952.

I had never been interested in him but it seemed like a truly off-the-beaten path museum, just my kind. But what sold me on Lambaréné was the name of its river:    Ogooué.  I HAD to see a river with such a wondrous name.

So I set off to Lambaréné on my way to Fougamou. Believe me, I was in the green heart of Africa. Green, as in rainforest.

I am glad I went. The river is awesome. The museum is charming. It preserves the old hospital and personal quarters from the 1920s as they were originally.   Next is the modern hospital, which attends to 80,000 consultations and 6,000 hospitalized patients every year, and continues to practice what I believe was Schweitzer’s most creative medical idea:  to welcome the African family, with place to wash, cook and sleep, in a hospital-cum-village.

True, the relatives provided – and still do – free labour. Also true, it is mostly women and girls who provide this free labour. In Gabon and elsewhere, caring for the sick and, increasingly, for the elderly, is women’s work.

In AIDS-ravaged Southern Africa, caring for the sick has put a burden on women and girls that is unthinkable to Western health consumers.

So huge, that the campaign Making Care Work Count lobbies governments for recognition and support of carers – who are subsidizing governments with their work, with little help, making up for woefully inadequate health budgets.

Notwithstanding the gender bias, to include the relatives in hospital design is much better than making them sleep on the street pavement, as I’ve seen in Luanda’s hospitals.

It also reflects a recognition that in Africa medicine must incorporate cultural and social meanings; that it can’t isolate the individual from the collective;  that the meaning of disease is part of a bigger reality. 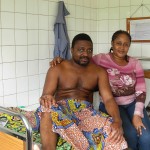 I travelled from Libreville, 300 kms away, in a taxi-brousse. The first to get in was with Yeyette Boko. She was worried to tears about her husband, Joel Boko, who was in Lambaréné being treated for an ulcerous thigh. He needed a graft. So Yvette had wrestled a two-week leave from her employer to be with him.

She breezed into his room: “Mon chéri, I missed you so much!” They snuggled on the bed and called their four-year-old son, who was staying with an aunt in the capital.

Next day I visited again. Yeyette had cooked a hearty meal. He seemed stronger. They looked happy. 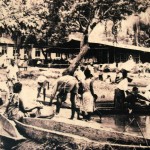 The old landing by the hospital-village.