Ask the woman sitting next to you in the bus, train, plane, taxi-brousse or donkey cart what is CEDAW, and most probably you will draw a blank look. C’est quoi?

Yet CEDAW – Convention of the Elimination of All Forms of Discrimination Against Women – has likely impacted on her life and her daughters, if she has any, in many ways, from pension and inheritance rights to the passport they hold. 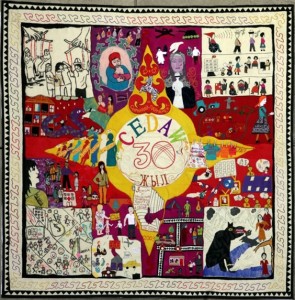 Quilt made by women of Kyrgztan. (Unifem)

CEDAW, which was adopted by the United Nations General Assembly 30 years ago today, is the global Bill of Rights for Women, the first international human rights treaty devoted to gender equality.

Through its 30 articles, CEDAW has boosted women’s rights worldwide in many ways.

Some examples:  new constitutional guarantees for women in Thailand; land- owning rights for women in Kyrgyzstan and Tajikistan; changes to the law of evidence to benefit women in the Solomon Islands; and reproductive health rights in Colombia.

Today CEDAW turns 30 and is the world’s most widely ratified treaty, with 186 signatory countries.

But there is no time to rest on laurels.

Attempts by conservative forces – from Washington to Jerusalem, from Riyadh to Jakarta – to erode CEDAW are underway, primarily in the field of women’s reproductive rights, nationality, family rights and relationships.

Several countries have failed to ratify the treaty – Iran, Nauru, Palau, Somalia, Sudan, Tonga and the United States, although the Obama administration has indicated it will.

Twenty-two countries have signed and ratified but reserve the right not to implement certain provisions.

Some are minor: Australia does not want to send women soldiers into combat.

Others are more threatening: the United Arab Emirates wants to keep its unequal inheritance laws based on Shariah, and Algeria, its Family Law.

Worldwide, the treaty’s implementation is uneven. In the Occupied Palestinian Territories, Palestinian women suffer abuse and denial of basic human rights at the hands of Israeli settlers and soldiers. The right to family reunification is particularly ignored.

Nevertheless, in three decades, CEDAW has truly changed the world for women, for those who fly on planes and for those who ride donkey carts alike. Equality is our right.