Warning: Creating default object from empty value in /home/gssn/public_html/ipsorg/blog/ips/wp-content/themes/platform/admin/class.options.metapanel.php on line 49
 How Can the Media Build Peace Culture? | IPS Writers in the Blogosphere

How Can the Media Build Peace Culture? 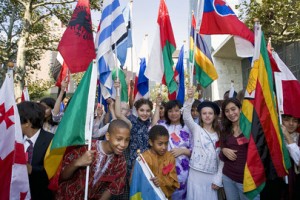 IPS’ General Director Mario Lubetkin is about to speak at the U.N. High-level Forum on a Culture of Peace in New York today.

Lubetkin’s participation high-lights the importance of the press in creating peace culture through its role as both documenters and public opinion makers.

Realising that importance, IPS has run a number of stories focusing on peace building at both the community and political level in the weeks leading up to the Forum, including two yesterday that take a closer look at our own role as journalists.

Constanza Vieira’s story on the state of the press in Colombia is an interesting one, as it’s a tale of caution on how long-term national conflict and close ties between the press and government can severely influence the tone of a national media establishment and limit the ability of critical journalists to counter ingrained hard-line narratives.

“One problem was that the media in [Colombia] had turned ‘peace’ itself into a dirty word”, she said, explaining how a shift is only gradually happening through the blogosphere in Colombia.

Instead of “spreading the poison,” journalists need to be trained to fulfill their obligation to provide context that helps “feelings turn into logic,” according to a Colombian journalist in Vieira’s story.

In an interview with IPS’ Rousbeh Legatis, Tarja Turtia, programme specialist at UNESCO’s Division for Freedom of Expression, affirms the importance of the media and particularly blogs in post-conflict states in “starting debates that could not be initiated openly before.”

She also stressed the importance of strong community media in countries like Sierra Leone, in preventing conflict by providing accurate and timely information to remote areas via radio, which UNESCO supports through its International Programme for the Development of Communication.

Since media pluralism is widely acknowledged as part of peace building, I should also mention the importance of self-representation in changing encrusted narrative and tip a hat organizations like Viva Favela in Brazil, who have created a platform for residents of urban slums across the country to tell their own stories as alternative to the often negative media representation that “moradores” experience.

Like Viva Favela, in the U.S. local public access T.V. channels like Manhattan Neighborhood Network here in New York actively built dialogues in communities and empower residents to become media makers and instigators of positive change in their neighborhoods.

Providing a platform for “slow” stories on peaceful resolution of conflicts and acts of community building in today’s rather cynical age of “if it bleeds it leads” has almost become an act of defiance.

But then, peaceful defiance has always been an essential part of opposing war.