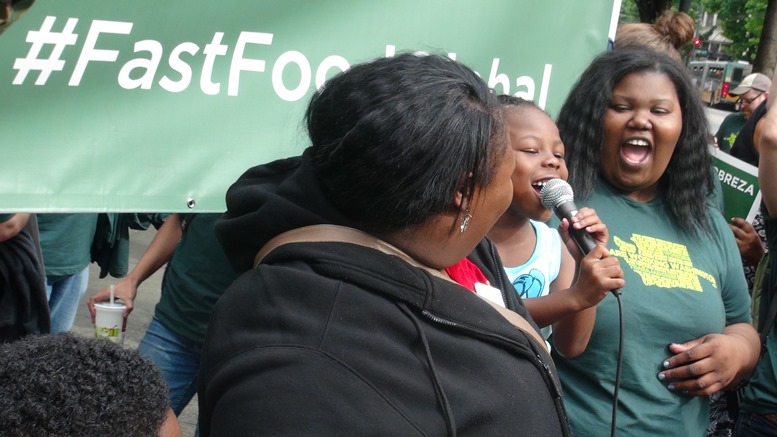 Note: This is an expanded, footnoted version of the article published on June 3, 2014 under the same headline by Inter Press Service.

“Supersize my salary now!”  The refrain rose over a busy street outside a McDonald’s in downtown Seattle.

A young African-American mother carrying a little girl told the largely youthful crowd that she had walked off the job to join them because “we’re getting tired of being pushed around”.  Her five-year-old took the microphone in both hands with a big grin and led a spirited chant: “We’re fired up, can’t take it no more!”

A few hundred ethnically diverse demonstrators filled a sunny afternoon with demands that fast-food chains pay a living wage.  Dancers gyrated to Aretha Franklin’s ode to “R-E-S-P-E-C-T”.  Seattle City Council member Kshama
Sawant said that workers in over 150 cities, including her hometown of Mumbai, India, had walked off their jobs that day.

Fast-food worker Sam Leloo captured the feeling of being trapped by low wages: “I believe in this movement because I’m trying to save enough to go to college and better myself.  And I can’t go to college because I don’t make enough money.  So it’s a Catch-22.”

According to the organizers, the Seattle event was one link in a chain of actions in over 30 countries by coalitions of grassroots worker centers, labor unions, community groups and faith organizations demanding better wages for fast-food workers. 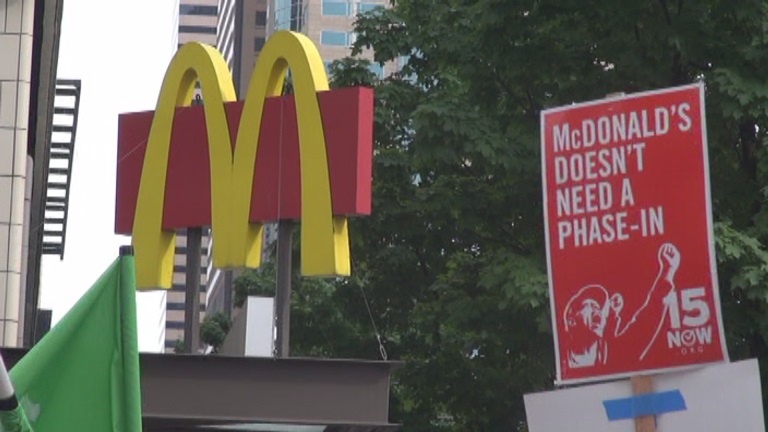 This prosperous Pacific Northwest seaport, though, is the place in the United States closest to actually raising the minimum wage for all workers to something approaching a living wage. From the current Washington state minimum wage of $9.32 an hour, already the highest in the country, Seattle’s mayor, city council, and a majority of citizens according to some polls all support ratcheting up the wage over 60 percent to $15.00. The debate now centers on how long the ramp-up period should be for different-size businesses and non-profits, whether benefits and tips will be included in the wage, and other implementation details.

Nationally, President Barack Obama has proposed an increase in the federal minimum wage.  Democrats introduced legislation in both houses to raise it from the current $7.25 an hour to $10.10 an hour over two years, and index it to inflation thereafter.[1] Recent national polls show strong support for the raise, even among conservatives.[2]  But the proposal was filibustered by Senate Republicans, throwing the initiative back to states and localities.

A national minimum wage was first established in 1938 by the Fair Labor Standards Act. Through 1968, it roughly tracked inflation, median wages and productivity.  But sporadic increases since then have failed to keep up with prices, and the inflation-adjusted wage has never returned to its 1968 high.  Meanwhile, it has fallen far behind productivity growth: had it kept pace, according to economist John Schmitt of the Center for Economic and Policy
Research, by 2012 it would be nearly three times as high, $21.72 instead of $7.25.[3]

To bypass the federal stalemate, since the 1990s state and local efforts to raise minimum wages have proliferated.  In the decentralized U.S. legal system, states and localities can set their own minimum wages, with the highest benchmark applying.  Twenty-six of the 50 states have raised or are raising their base wages above the federal level, with increases scheduled in eight states and the District of Columbia.[4] More than 120 cities have also raised their benchmarks,[5] and besides Seattle, efforts are underway in San Francisco, Oakland, Los Angeles, San Diego, Chicago, New York and Portland, Maine.[6]

This resurgent movement to raise the floor of the labor market is surfing the zeitgeist of renewed international debate on economic inequality.  “Capital in the Twenty-First Century”, the chef d’oeuvre of French economist Thomas Piketty, has levitated to number one on the New York Times non-fiction bestseller list.[7] Piketty documents “forces of divergence” in modern capitalism driving current levels of wealth concentration unequalled since the 1920s.  To remedy some of the “potentially terrifying” consequences of these “long-term dynamics of the wealth distribution”, he proposes a global tax on wealth.[8]

Piketty is no prophet crying in the wilderness.  Institutions as influential as the International Monetary Fund and the U.S. Federal Reserve Bank have joined the chorus.

IMF Managing Director Christine Lagarde has flagged “rising income inequality” as “a growing concern for policy makers around the world.” Equity along with growth, she has pointed out, are “necessary for stability”, which in turn is “essential for reducing poverty”.  The IMF, Lagarde has said, should foster “fiscal policies to reduce poverty” and advance “inclusive” growth.[9] Lagarde previously served as Finance and Economy Minister in the center-right French government of Nicolas Sarkozy and chaired the G-20 for France.[10]

Fed chair Janet Yellen has called “a huge rise in income inequality” going back to the 80s “one of the most disturbing trends facing the nation”.[11]

Both the IMF and the Organization for Economic Co-operation and Development have recently recognized that moderate minimum wage raises may be beneficial.[12]

As a non-fiscal means of raising the ground floor of the income pyramid, minimum wage hikes have proved attractive even to some conservatives, in part because they do not require direct outlays by cash-strapped governments.

The Economist magazine, a British champion of market hegemony, has swung from opposition to grudging acceptance that measured minimum wage increases can do more good than harm.[13] Another business-friendly voice, the U.S. news service Bloomberg, has editorialized in favor of raising the national minimum.[14]

Conservative British Finance Minister George Osborne recently advocated an increase in the U.K. base wage.[15]  And center-right Chancellor Angela Merkel approved Germany’s first minimum wage legislation in April.  Pending parliamentary ratification, the benchmark will be set at 8.50 euros (US$ 11.75) in 2015.[16]

Compared to other wealthy countries, working for the Yankee dollar pays poorly at the low end.  The U.S. minimum wage of $7.25 was a miserly 38.3 percent of its 2012 median wage.  Britain’s ratio was 46.7 percent, slightly above the European Union average, while France led with a minimum 60.1 percent of its median.  Of major industrialized nations, only Japan, at 38.4 percent, had a percentage of median nearly as low as the U.S. one.

As the minimum wage in much of the United States falls ever farther behind the economy, labor-market and demographic undertows have constrained increasingly older and more-educated workers to take low-wage jobs.

In 1979, 26 percent of low-wage workers (making $10 an hour or less in 2011 dollars) were under 20 years old, 39.5 percent had less than a high-school diploma, and 25.2 percent had some university or a university degree.  By 2011, only 12 percent were under 20 and 19.8 percent had completed less than high school, a drop of roughly one-half for each measure.  The proportion with at least some college had grown to 43.2 percent, an increase of more than two-thirds.  Fifty-five percent of minimum wage workers were women, and 43 percent were people of color, both above their respective proportions in the U.S. workforce.[17]

The stereotype of low-wage workers as mainly high-school kids earning extra pocket money, never very accurate, has been made obsolete by decades of economic tsunamis washing away better-paying manufacturing jobs.

Nevertheless, some politicians and business groups confront each proposed minimum wage increase with stern warnings that it will destroy jobs.  Historically, though, the predicted damage has yet to materialize.

After decades of experience, rigorously empirical studies have consistently found no significant effects on employment due to minimum wage increases at national, state or local levels.  Increased costs to businesses have been absorbed mainly through very small price increases, averaging on the order of one percent for all affected businesses.  Food, hospitality and a few other industries that use more low-wage labor have tended to increase prices slightly more, but rarely more than an average of three percent.[18]

These trends held even for Santa Fe, New Mexico, after its 65 percent minimum wage hike in 2004, the biggest local raise.  There, increased expenses against revenues averaged around one percent for all affected businesses. The restaurant and hotel industries had average cost increases of three to four percent.  To cover these, a $10.00 meal would have had to rise to $10.35.[20]

In any case, the pertinent question is not whether any jobs are lost: it is whether affected workers end up better off after the increase.

Unlike the high-school-to-Social-Security factory jobs of a half-century ago, today’s low-wage service jobs are notoriously volatile.  Turnover is often high, with workers leaving involuntarily as businesses fail or cut labor forces, or voluntarily to seek better jobs. Weekly hours also frequently fluctuate with business conditions.  From a worker’s point of view, a “lost job” usually translates into days or weeks until the next job, not a life-changing
loss.

After previous minimum wage increases, even if total hours worked yearly were reduced slightly for some workers, the size of the hourly raise has nearly always ensured that their total yearly income was higher than before the increase.[21]

Back at the Seattle rally, Council Member Sawant, elected on a platform that highlighted raising the city’s minimum wage to $15 an hour, preached to the choir: “Because of our courage, our solidarity with each other, not because of the powers that be, we have brought things to this point where fifteen can become a reality in Seattle and inspire the whole nation and the whole world.”

John Schmitt. “Why Does the Minimum Wage Have No Discernible Effect on Employment?” Washington, DC: Center for Economic and Policy Research, February 2013. http://www.cepr.net/index.php/publications/reports/why-does-the-minimum-wage-have-no-discernible-effect-on-employment