Warning: Creating default object from empty value in /home/gssn/public_html/ipsorg/blog/ips/wp-content/themes/platform/admin/class.options.metapanel.php on line 49
 Memories of a Zookeeper | IPS Writers in the Blogosphere

Before the Taliban took over the city in 1996, Kabul Zoo was home to 37 species. There was Marjan, the zoo’s much-loved lion, an Indian elephant, deer, birds and numerous other animals.

Taliban fighters killed some for food. A few more escaped and were never traced. The zoo, which was established in 1966, and counted as among Asia’s best, was ravaged by war. That some of the animals survived was due to the dedication of zookeepers like Shah Barat. 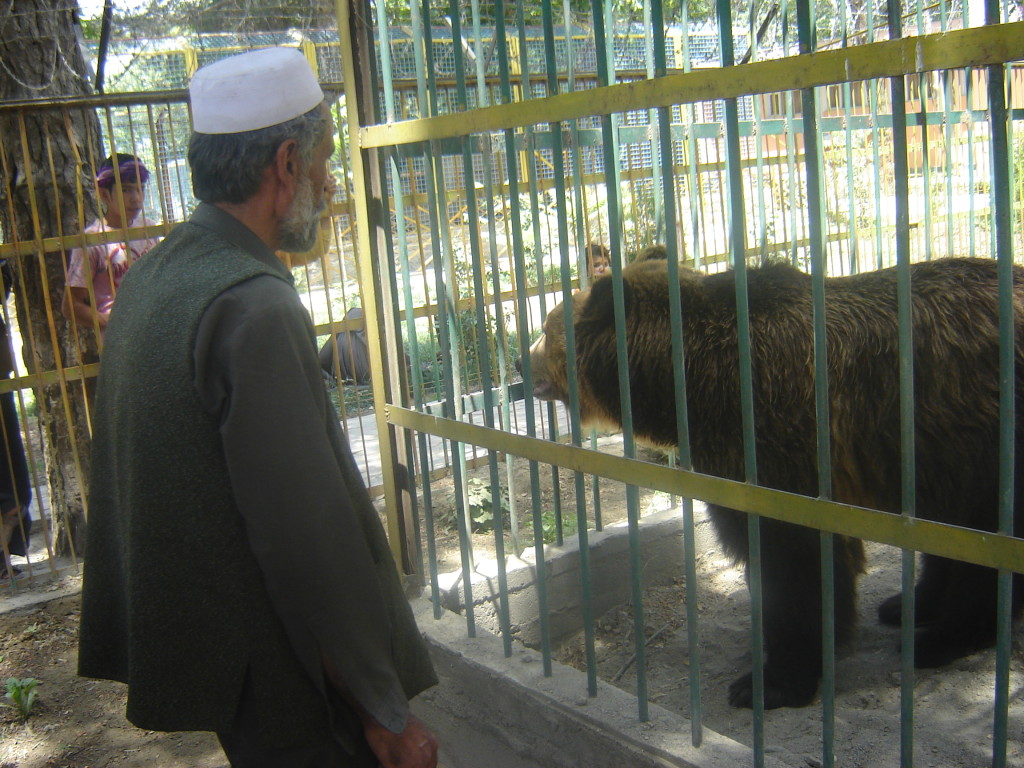 “I suffered many hardships, hunger and danger, but I did not let the animals in the zoo go hungry,” he says. “They are also the creatures of God and goodness to them is counted as being good in the eyes of God. Unfortunately the hard hearted people turned their guns on these dumb creatures.”

The young Shah Barat had sought employment in the zoo because of his love for animals from childhood. “I had a special sympathy for the animals in my village,” he says. “I had kept many in the house. Villagers knew me as an animal lover. When I saw a sick dog, I would take care of it. Actually my house was a small zoo!”

Kabul was far from his village in Andar district, Ghazni province, but Shah Barat was determined to work only in a zoo. In 1988, he joined the Kabul Zoo. Five years later, at the time of the first major exodus of civilians from Kabul, he was considered one of the senior zookeepers with many staff members fleeing the incessant bombing by rival mujahedin factions jockeying for control. The mujahedin had formed the government after toppling the communist Najibullah regime in 1992. But the power-sharing arrangement was short-lived, and between 1993 and 1996 when the Taliban took over Kabul, power continuously shifted from one faction to the other.

“Every time a rocket was fired the animals were traumatised,” he recalls. “I never thought the great Kabul Zoo would be turned so soon into a ruin!”

The civil war years were a time when people cowered in their houses from fear, according to Shah Barat. The price of everything was sky high. Salaries were not paid on time, and when they were, it wasn’t enough for even a week. Still, the zoo keepers bought rations for the animals out of their own meager resources.  “I kept my 10 children and wife hungry, but the animals were never hungry,” he says.

He speaks particularly warmly about his relationship with Marjan (meaning coral in Dari and Arabic), the zoo’s only lion. “Marjan was a gift from the Cologne Zoo. People came from all over the country to see him. He was our only source of income,” he recalls.

The zoo’s fortunes further dipped with the Taliban takeover of the city. The fighters showed no mercy for the animals, as groups of gunmen entered the zoo to tease and shoot.

He remembers the day a gunman foolishly entered the lion’s enclosure and was torn to pieces. The next day his friends returned and threw a grenade in Marjan’s den. The unsuspecting lion was horribly maimed. “Marjan became blind in one eye. His jaw was full of shrapnel. He lost several teeth, which meant that he could not tear the meat he was fed. He couldn’t smell. He lived for another 10 years but he was a pale shadow of his former regal self,” he says.

He fondly remembers a monkey that was a gift from Nepal. She had become tame in the zoo and would even “eat her food with a spoon much to everyone’s delight,” he says. When the war broke out, and rockets rained from the sky, the caged animals were frantic with fear. “The war made her wild, and she escaped,” he says of the monkey.

When one day a bomb landed on the deer enclosure, he ran to see the damage, only to find that “All the deer were bathed in their blood.”

After U.S. troops drove out the Taliban at the end of 2001, the horrendous abuse of animals was widely reported. The one-eyed lion Marjan became world famous and many zoos and organisations sent teams of experts to help rehabilitate the zoo.

*Noor Wali Saeed Shinwarai writes  for Killid, an independent Afghan media group in partnership with IPS. By distributing the testimonies of survivors of war through print and radio, Killid strives for greater public awareness about people’s hopes and claims for justice, reconciliation and peace across Afghanistan.