Warning: Creating default object from empty value in /home/gssn/public_html/ipsorg/blog/ips/wp-content/themes/platform/admin/class.options.metapanel.php on line 49
 Memories of War: 10 Graves, One Escape | IPS Writers in the Blogosphere

Kabul’s seventh district is also called Sarzamine Sokhta in Dari (Burned Land). Nearly everyone here has lost a family member in the successive rounds of blood-letting witnessed by the city over the last three decades. In this testimony, Mir Abdul Wadood, now a teacher in a school in neighbouring Parwan, realls the year 1999 when Taliban dragged away and shot nine of his family members. 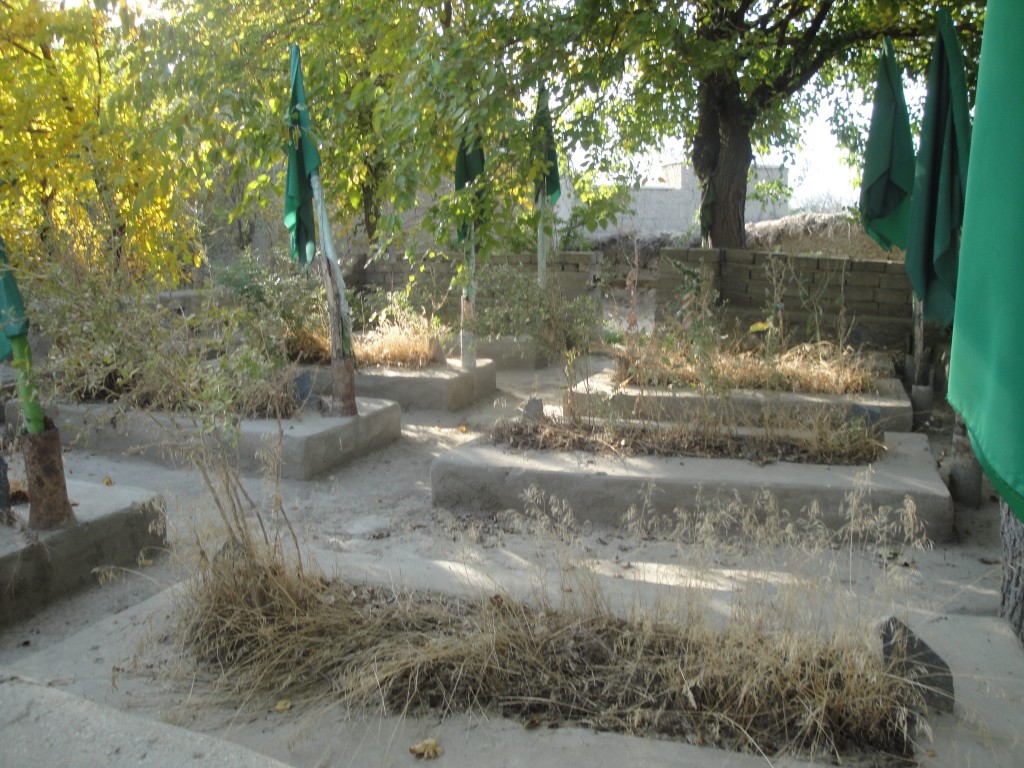 The green flags flags on the 10 graves in Parwan’s Laghmani village are visible from miles away. Credit: Killid

Among the dead that day were Wadood’s two grown-up sons, two nieces, two nephews and his wife’s two nephews. One other nephew, Abdul Hai, had a miraculous escape that allowed him to recount the story. Shot in the face, he managed to drag himself on to a road before collapsing. Passersby took him to Anaba Hospital in Panjsher, where he gained consciousness, and told them the exact location of the cold-blooded murder of nine other family members.

Wadood’s family, which hailed from Kabul and Karez Mir, north of the city, had sheltered in Parwan province to get away from the Taliban, who had formed the government in Kabul. But the Islamic fighters continued advancing north in pursuit of Ahmad Shah Massoud, an anti-soviet political and military leader who, together with his forces, had retreated to his stronghold in the Panjsher Valley.

On that fateful day in 1999, the Taliban arrived in a Datsun pickup truck Wadood’s home, and took away 10 young people, between the ages of 20 and 35 years. The captives, their hands tied behind their back, were take away and made to stand in a circle. Then, one by one they were dragged into the middle of the circle, and shot dead.

The dead, all between the ages of 25 and 35, were put to rest side-by-side in nine graves in Parwan’s Laghmani village. Today, the green flags that the family placed on the graves are visible from miles away, standing out between the yellow leaves of trees.

Killed by grief
“Unfortunately I was in Kabul at the time, and the way to Parwan was blocked,” says Wadood. “When I came back 40 days later, I went to the graves of the nine members of our family, including my two sons – one 29 and the other 25. I cried,” he says. “The graves were like swords in my eyes,” he adds.

But there was more bad news for Wadood. On his return from the graveyard he decided to visit his sister who herself had lost two sons and a daughter – to “share her grief,” he says.

“That is when relatives told me she had died. The fresh grave near the nine, which I had seen and prayed over, thinking it was a neighbour’s, was actually my sister’s. Her heart had failed from grief.”

Wadood gets up and shuts the door leading to an inside room where his wife is. He says she has been very disturbed ever since he told her that a journalist was coming to interview them about the death of their sons.

“My wife has never been the same since the deaths,” he says. “When the nine coffins were brought into the house everyone cried and screamed, but not my wife. Her voice was not heard. Her depression worsened when our elder son’s widow married again, leaving us to take care of their two children.”

Scarred forever
Wadood confides that their sons are never mentioned because it upsets his wife. “Laughter has left our house,” he says. “We never mention our sons. I have had to bury their remembrance along with them, I have no choice,” he adds.

Today, a third of his salary as a schoolteacher, which is roughly 6,000 Afs, or 110 U.S. dollars, is spent on medication for his wife.

His story is not unusual, Wadood says. Between 1996 and 2001, the Taliban and Massoud’s Northern Alliance fought for control of Parwan. Every time the Taliban won the province, the Shariah law was implemented. Parts of the province went back and forth from Taliban hands to Massoud’s. Hundreds of civilians died. The fighting ended with Massoud’s assassination by two suicide attackers believed to be al Qaida, on Sep 9, 2001 – two days before the bombing of the World Trade Centre in New York.

Three months later, in December 2001, U.S. forces invaded Afghanistan and ousted the Taliban starting a new chapter in the tumultuous history of Afghanistan and its civilian polulation.