Warning: Creating default object from empty value in /home/gssn/public_html/ipsorg/blog/ips/wp-content/themes/platform/admin/class.options.metapanel.php on line 49
 Memories of War: A Bloodbath in Deh Afghan | IPS Writers in the Blogosphere

The US in the Middle East Today Afghanistan: How to Wind Down

Memories of War: A Bloodbath in Deh Afghan 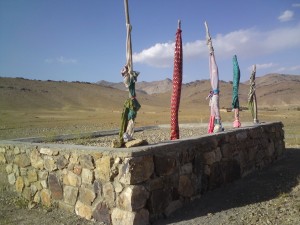 Ebrahim Mahdawi writes for Killid, an independent Afghan media group in partnership with IPS. By distributing the testimonies of survivors of war through print and radio, Killid strives for greater public awareness about people’s hopes and claims for justice, reconciliation and peace across Afghanistan.

In this testimony, Seventy-year-old Abdul Husain from Deh Afghan remembers a Russian attack on his  village in the Nahoor district. Today, Nahoor, in Ghazni province, is picture postcard pretty: green with plentiful water from streams and rain. There are orchards of apricots, plums, prunes and other fruit. But three decades ago it was the site of a bloodbath.

The worst year was 1981, two years after the Soviet army rolled across the border into Afghanistan. Russian soldiers tried to fight their way into Nahoor through the Qeyagh pass. They bombed Deh Afghan and Sokhta Alawdani, the two villages closest to the border.

“The murdered people were all my relatives – one of my brothers, four cousins and so many others,” says Husain.

There are families who don’t know what happened to loved ones, while in village after village, the many physically challenged survivors are daily reminders of the bombings and killings.

Nahoor with its majority Hazara population was on the frontline of the war between Soviet soldiers and mujaheddin. Power in Kabul rested in the hands of Babrak Karmal, the third communist party president. Nahoor was the first district the Afghan fighters had wrested from the “Russians” as the Soviets were called. The Soviet army bombarded Nahoor from the air and with heavy artillery.

According to Husain, who is also known as Malak Abdul, even people in remote and mountainous areas of Nahoor were not safe from Russian “barbarity”. The terror was everywhere. There was no peace for civilians. Those who objected were tortured, and thrown in prison.

Russians entered people’s houses, and stripped it of all belongings. Buildings were demolished. Families fled the fighting and killing. The only people who remained were the mujaheddin.

“I also took my family to a safe area hoping to come back when it was safe,” says Husain.

While his younger brother and his family left, his elder brother and relatives stayed to defend the village. “My brother knew the Russians were coming but he was not aware they had already entered the village. He tried to save himself by moving to Ghara, a village adjacent to ours. But he did not make it,” he says.

Husain and his brother, their families and others from the village, kept walking. But there was no escaping the whine of fighter planes and pounding of shells. “It was terrifying. We did not know how to get away. We decided to go to the Siah Qul area where we thought it would be safer and out of the enemy’s line of firing,” he says.

One kilometre short of Siah Qul, a barren valley in the desert, the Soviet soldiers caught up with the fleeing civilians. “There was one kilometre to get to Siah Qul. Suddenly the desert erupted with the sound of tanks. The Russians had besieged the desert.

“We didn’t know the mountains above Siah Qul were the hideout of mujaheddin,” says Husain.

Russian tanks trained their guns on the winding procession of fleeing civilians. In the bloodbath that followed, only those who ran up the mountainsides survived.

“We were still in the middle of the desert when the Russian tanks started firing toward us from three sides. We ran as fast as we could toward Sia Qul valley. The only hope of escape lay in going into the mountains where the mujaheddin were hiding,” he recalls.

The first one to go down was a relative called Sultan. A shot first got him in the leg. He was screaming, but the Russians had no pity, says Husain. “They sprayed him with bullets,”. Bodies littered the ground.

Husain still cannot fathom how he was the only person who escaped. “The invaders killed all of them. They fired hundreds of shots,” he says.

The Soviet soldiers eventually retreated after 24 hours in nearby Sokhta Alawdani, and men started trickling back into the village. “Women and children stayed away because there was still the possibility of the Russians returning,” he says. “We gathered together all the bodies of the dead.” They decided to bury the martyrs in one place, on a hill called Tapa e Karez. “It wasn’t a graveyard. The hill is called the hill of martyrs,” he says.

The Russians never came back to Nahoor and the village remained in mujaheddin hands until the Soviet army pulled out of Afghanistan in 1989.