Warning: Creating default object from empty value in /home/gssn/public_html/ipsorg/blog/ips/wp-content/themes/platform/admin/class.options.metapanel.php on line 49
 Missing the Point? A critical review of MDG | IPS Writers in the Blogosphere

Italian Women – The Horror Is Richard Goldstone an anti-Semite?

Missing the Point? A critical review of MDG

Next time you read a story or a press release moaning about how country X will not reach the Millennium Development Goals, think twice – whose goal and whose target is it? We know the deadline but do we know the baseline?

Instead of striking a balance between ambition and realism, the MDGs have become “money-metric and donor-centric”, “meaningless catch-all phrases.”

So says Jan Vandemoortele, a Belgian national, a United Nations senior official and one of the architects of the MDGs, in a thought-provoking article in the July issue of  Development Policy Review of the Overseas Development Institute. (read it here) 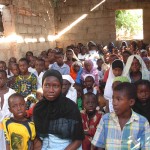 The author recalls that the MDGs were set up in 2000 as collective targets based on extrapolations of global trends.  They are vague by definition; they are not one-size-fits-all.

Instead, one should look at countries’ historical backgrounds, natural endowments and specific problems, then adapt the Goals to each circumstance, as Mozambique, Cambodia and Ethiopia have done.

Otherwise, this puts undue pressure on the poorest countries and, given that most of these are in Africa, nurtures Afro-pessimism.

For example, the global target for education “is not realistic” for countries in conflict, he says.

True, targets do change. For example, water for all in 2015 morphed into the more feasible goal of halving the number of people without clean water.

A mantra has evolved: if only there were more money and higher economic growth, the MDGs would be achieved. Who is fond of these “magic numbers”? Staff at global headquarters of aid organisations, says the author, because of their “excessive reliance on abstract concepts.” (he should know, with his long career as a top UN official). 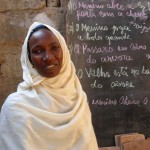 ..and their teacher. By M. Sayagues

Vandemoortele sees the MDG canon being usurped by interest groups to push their agendas or devalued “as a repackaged call for more foreign aid.”

Rather, the MDG should be a tool to examine disparities and inequities within countries. In his view, the poorest people continue to be excluded. Many of these are women. Without better sex-disaggregated data, the gender dimension of hunger, illiteracy, disease and poverty remains unexposed.

Most progress takes place among the better off, and inequality and inequity keep rising, says the author.

“The targets are often presented as a universal good that will not demand tough policy choices and hard trade-offs among social groups within a country,” he says.

What do you think? Send us your views.