Among a sea of more than 3,000 journalists clacking away at keyboards in the media centre at the Rio+20 conference, Zofeen Ebrahim desperately searched for an adapter for her computer. Having arrived in Rio de Janeiro just 12 hours earlier, Ebrahim bubbled with nervous energy, or perhaps jetlag. 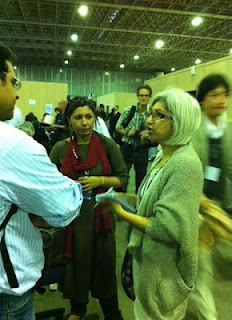 “I need to get something to eat and then I want to find a woman leader who was here 20 years ago,” she said as she struggled to plug in the adapter loaned to her by a fellow journalist.

A mother of two from Pakistan, Ebrahim was in Rio last week to cover the conference along with 16 other journalists from developing countries around the world. Their trip was part of an IFAD-supported training programme presented by the Thomson Reuters Foundation (TRF) and IPS International News Agency.

Read the rest of the post at IFAD’s social reporting blog here.

Tagged with: Reframing Rio • Rio Plus 20