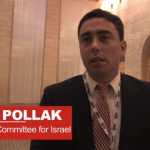 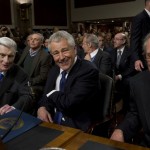 The confirmation, which followed a more-lopsided 71-27 vote to end a Republican-led filibuster against the decorated Vietnam War veteran, broke mainly along party lines, [...]

Yesterday, Mitt Romney held three fundraisers in the Hamptons, the exclusive beach towns known as a playground to super-rich New York City financiers.According to the Los Angeles Times, one event was co-hosted by Daniel Loeb, a hedge-funder who turned against President Obama and bankrolled a neoconservative pressure group [...]

The People Who Brought You The Iraq War Release A New Ad: Bomb Iran

The Emergency Committee for Israel (ECI) released a new ad today suggesting that the U.S. should immediately bomb Iran. Among those behind the ECI and its ad are the same people who pushed the U.S. into the Iraq war.

The ad from ECI, a group which aims to push pro-Israel [...]

In a debate last night with Jeremy Ben Ami of the liberal pro-Israel group J Street, neoconservative don Bill Kristol told the audience in the New York synagogue that he had no problems with President Obama’s Israel policies. But just two months ago, a right-wing pro-Israel group Kristol heads rolled [...]

The right-wing pro-Israel lobby group the Emergency Committee for Israel launched an ad campaign attacking President Barack Obama for his record on Israel. The ads, featured on billboards, public transport and with a web ad on the New York Times website, go after Obama’s pro-Israel bona fides, accusing him of, as the campaign’s tagline [...]

It was just another Tuesday on Capitol Hill. A handful of Members of Congress and staff showed up to hear a briefing by a trio of revanchist Israelis pushing for permanent occupation of the Jordan Valley in the West Bank. Everyone in the room nodded with approval and flipped through what amounted to a colorful brochure [...]

From the IPS wire (links added):

WASHINGTON, Mar1, 2011 (IPS) – J Street, the Washington-based “Pro-Israel, Pro-Peace” advocacy group, drew a large crowd to its annual conference this year despite criticism over its controversial calls for the Barack Obama administration not to veto a U.N. Security Council resolution condemning Israeli settlement construction in [...]