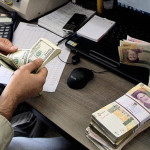 Economic issues are paramount on the minds of Iranian voters as they ponder the long list of candidates registered for president: who among them is likely to survive the vetting by the Guardian Council, and, of those, who offers the best plan to get Iran’s economy out of the rut it has [...]

Appearing on ABC’s This Week yesterday, GOP presidential hopeful Rep. Michele Bachmann (R-MN) claimed that Iran had threatened the U.S. with a nuclear attack, a proposition so discordant with the facts that ABC host Christiane Amanpour told the candidate that the claim wasn’t possible because Iranian officialdom has [...]

Two more Iranian officials have been added to the list of people who are named, shamed, and boxed into their Iranian existence (assets frozen, travel ban, etc.).

The officials, the head of Iran’s Revolutionary Guard Corps and a Tehran prosecutor, were sanctioned because of their role in the 2009 crackdown against peaceful protesters in the wake [...]