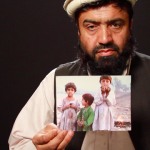 Life After a Drone Strike

The only thing the outside world really knows about Waziristan is that it is dangerous. Since 2004, there have been hundreds of US drone strikes there, which government officials assure are killing dangerous people. But no foreign journalist travels to the most-bombed region of Pakistan to separate dead mother [...]

The US Government has not published casualty lists for Pakistanis reported killed and [...]