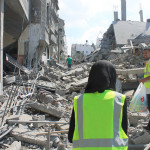 Like many of us, I’ve been very busy on social media since Israel began its military operation in Gaza. I see a lot of ignorant nonsense there, and it’s not limited to the pro-Israel side. I also see a lot of shoddy thinking and ignorance of the facts. Since [...]

Israel Uses Social Media To Defend Its Assault on Gaza

The current Israeli onslaught against Gaza contains many echoes of the assault four years ago. In one regard, however, it is clear that Israel learned some lessons from its experience with “Operation Cast Lead” and is applying it to “Operation Pillar of Defense.” Those lessons are reflected in Israel’s use of [...]

The barks of pro-Israel media “watchdog” groups like CAMERA (Committee for Accuracy in Middle East Reporting in America), The Israel Project , and the meretriciously monikered website HonestReporting have echoed the Israeli government’s talking points about the Israeli navy’s attack on half a dozen civilian ships bringing aid to Gaza, in defiance of an Israeli blockade.

But if you’ve been looking to the so-called “liberal” media for more balanced coverage of the events as they’ve unfolded in the international waters off the Gaza coast, you’ve probably gotten thef yip-yap of a pro-Israel poodle.