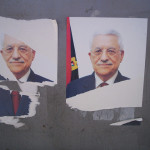 Tragedy and Perfidy: The Figure of Mahmoud Abbas

Palestinian Authority President Mahmoud Abbas met with US President Barack Obama this week, following in the footsteps of Israeli Prime Minister Benjamin Netanyahu earlier in the month. But unlike Netanyahu, Abbas is a much less heralded or even well-known figure in Washington. And, above all, he is a [...]

Top Herman Cain foreign policy adviser J.D. Gordon drew controversy for his connections to Atlantic Bridge, a group exposed as a front for defense contractor lobbyists, the Conservative Party in England, and a web of connections to wealthy pro-Israel lobbyists in Britain. But while [...]