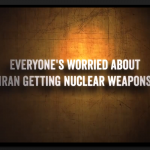 The viral campaign to set a “red line” for Iran

via The American Independent

A viral video calling on world leaders to a “set the red line” to prevent Iran from acquiring a nuclear weapon has garnered over 1.3 million YouTube views thanks to a savvy social media campaign on Facebook and Twitter.

In response to a worrying trend in U.S. politics Lobe Log is launching “Iran Hawk Watch”. Each Friday we will post on notable militaristic commentary about Iran from a variety of sources including news articles, think tanks and pundits.

The official position of the U.S. on Iran is still – rightfully — that no one can be sure that the Iranians are bent on making a nuclear weapon.

In a briefing yesterday, acting State Department spokesperson Mark Toner put an exclamation on this when he was asked if the Iranians “want a bomb or [...]

When the Bush administration used the Iraq War as a vehicle to spread democratic change in the Middle East, anger with the United States on foreign policy issues — particularly Iraq and the Arab-Israeli conflict [...]