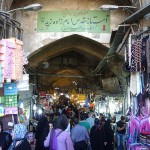 The Making and Unmaking of Iran Sanctions

A new report released by the International Crisis Group this week examines the efficacy and unintended consequences of sanctions on Iran and suggests steps that can be taken during the diplomatic process to unwind them and mitigate their humanitarian consequences while addressing the nuclear issue more effectively. “The [...]

Graham: ‘We Should Tell The Iranians, No Negotiations’ Until You Give Us What We Want

Senate Republican hawk Lindsey Graham (SC) said on Fox News last night that the U.S. shouldn’t negotiate with Iran over its nuclear program until it accedes to all U.S. demands and gives up its nuclear program entirely. The remark comes after a week where Congress considered a flurry of hawkish legislation and resolutions about Iran [...]

Greg Thielmann, a former intelligence official with more than 3 decades of service under his belt, knows a thing or two about intelligence on alleged nuclear weapons programs. He argued during the beginning of the U.S.’s war on Iraq that the intelligence he and his team presented to the Bush Administration about Iraqi [...]

During the same week that President Obama said the window for diplomacy with Iran over its nuclear program was “shrinking” high-level Iranian official Mohammad Javad Larijani has publicly pushed back against assertions that Iran wants to militarily harm Israel and offered concessions on its nuclear program in exchange for Western cooperation. In an interview with [...]