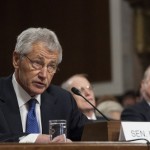 No sooner had it been announced that the Senate was preparing to vote for cloture on Chuck Hagel’s nomination as Secretary of Defense than the Washington Free Beacon‘s Adam Kredo unleashed yet another attack on the former Nebraska senator. After spending two and a half months battering Hagel with specious accusations that [...]