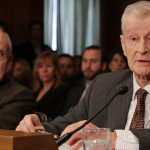 *Editors’s Note: This letter was made available by the New York-based Iran Project and has been sent to Senate Majority Leader Harry Reid.

We support President Obama’s decision to seek a first [...]

As President Obama assembles his new national security team, all eyes are on the four top jobs. These choices obviously matter, to ensure effective US diplomacy (Secretary of State); relevant but reduced military power (Secretary of Defense); an intelligence function attuned to understanding the world rather than [...]