Warning: Creating default object from empty value in /home/gssn/public_html/ipsorg/blog/ips/wp-content/themes/platform/admin/class.options.metapanel.php on line 49
 The Locusts are Coming – But will Aid be Coming as Fast? | IPS Writers in the Blogosphere 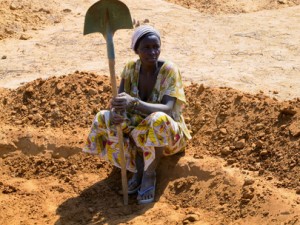 As I reported last month, the United Nations Office for the Coordination of Humanitarian Affairs (OCHA) recently adjusted its needs projections for 2012 upward in light of what can be called a foreseeable escalation of the food crisis in the Sahel that started last fall.

With four months left to the year, only 51 percent of the funding goal for the region has been met according to latest numbers by the U.N.’s Financial Tracking Service.

So far, an estimated 19 million people in the region are in dire need of assistance, many of whom were expected to rely on emergency food aid as primary means of sustenance by August.

In a special humanitarian bulletin on the Sahel crisis published last week, OCHA now warns of a developing locust infestation that could affect another 50 million people and diminish yields in the upcoming October harvest.

“Desert locust infestation remains dangerous as more egg-laying and hatching are expected in the coming weeks. Agricultural crop production, food and nutrition security, and the livelihood of some 50 million people in Chad, Mali and Niger are currently at risk, according to the FAO. This threat is the most serious since 2005.

Ground teams in Niger have treated 1,200 hectares against the pest since 5 June but ground surveys need to be scaled up to determine the scale and extent of current breeding, especially in those areas where rains have recently fallen.”

Still, rains are badly needed, as an early end to the current rainy season would further affect the upcoming harvest and increase food prices, according to a special report by the Famine Early Warning System Network.

As if that weren’t enough to juggle, cholera is now becoming an increasing worry in Niger, where refugee camps are a potential hotbed for the disease that could affect neighbouring countries along the Niger river, such as Mali, Nigeria and Benin.

About 52.000 people have fled political upheaval in Mali for Niger where 394,000 children under five will need treatment for severe acute malnutrition this year, according to UNICEF, which warns that malnutrition increases the chances of cholera outbreaks.

Nigeria has seen three times the number of cholera cases this year that it registered in 2011, according to Innocent Nzeyimana, the World Health Organization (WHO) Emergencies Manager in Niger in a recent OCHA story. “At this rate, we should be prepared for at least 9,000 cases by December.”

“With high levels of water contamination and inadequate sanitation, our area is so prone to cholera. We’ve had cases in 2010 and 2011, but this time it is really getting serious.”

“In a closed environment like a camp, the spread is very fast and we may end up dealing far beyond the 9,000 projected cases. We don’t want that to happen.”

Prevention and treatment of cholera, meanwhile remains underfunded across the Sahel, with only 21 percent of the projected 53 million dollars needed for such programmes covered so far. In Niger only 30 percent of the roughly 8-million-dollar projected sanitation need has been met.

WFP is appealing for urgent contributions of 115 million dollars to address pipeline shortfalls for the next three months, according to last week’s OCHA bulletin, as the region is going through its lean season.

As the region awaits the fall harvest and food prices soar, many families continue to sell off their life stock, thus further diminishing their future capacity to foresee in their own livelihoods.

The United Nations Food and Agricultural Organization (FAO), which aims to build farmer’s resilience to future crises has seen less than 25 percent of its 112-million-dollar appeal met, threatening FAO’s ability to support preparations for the next food production campaign from October to December.

FAO is appealing for 10 million dollars to tackle the locust situation. So far France has contributed 550,000 dollars, and another 2.8 million has been pledged bi-laterally.

Last month, British NGO Development Initiatives released a comprehensive report on Humanitarian Aid that projected record shortfalls for 2012. Among other conclusions, the report showed a disproportionate funding for the 2010 mega-disasters in Haiti and Pakistan that syphoned away funds from other countries, including crisis prevention in countries in the now heavily affected Sahel region.

A quote from an OCHA rep in a recent AP article sums it up nicely, I think:

“Pictures of starving goats do not attract aid in the same way as images of dying children.”

Well, folks, we’re getting there.