Some Thoughts on the Nonaligned Movement Summit in Tehran Is this Déjà vu? 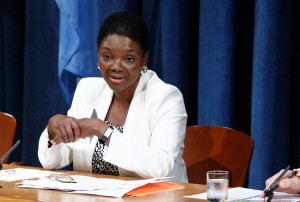 Valerie Amos,  U.N. Under-Secretary-General for Humanitarian Affairs and Emergency Relief Coordinator, briefed the press yesterday on her recent trip to Syria and Lebanon.

In her opening statement, Amos expressed concern that the humanitarian situation has visibly worsened since her last visit in March and cited government figures of 1.2 million people currently seeking shelter in public buildings across Syria.

So far, only about half of the funding appeal for the crisis has been met, the Under-Secretary-General said in response to questions by gathered press, with the majority of funds going to food aid.

She appealed for international partners “to contribute more generously.”

The World Food Programme and Syrian Arab Red Crescent together were able to feed 820,000 people last months, according to Amos, but the U.N. is “falling short” she stressed, in light of an estimate 2.5 million people in need.

The most urgent and growing needs are for health care, shelter, food, water and sanitation. There are serious public health issues in the school buildings that are being used as shelters. There will also be disruption to the education of thousands of Syrian children when the academic year begins in September, unless other solutions are found in terms of housing internally displaced people.

Since the ability to distribute food depends on the local security situation, food distribution has also been “patchy,” she said.

We face problems with access to people in need, particularly where there is intense and ongoing fighting, but funding is also holding us back. If we had more resources, we could reach more people, especially as we have established solid partnerships with local NGOs and with the Syrian Arab Red Crescent.

In response to questions regarding a proposal to establish “safe-zones” across the country, the Under-Secretary-General said that a number of obstacles stand in the way, including the fact that Syria opposes the idea and that policing such zones would be impossible without a Security Council resolution. There currently is “no appetite in the Security Council” for such a resolution, Amos said.

Amos’ visit followed the resignation of Kofi Annan, Joint Special Envoy of the United Nations and the League of Arab States for Syria, earlier this month after the Security Council reached a dead end on Syria .