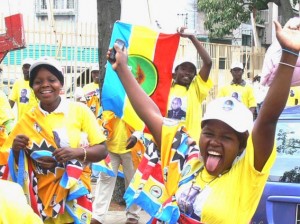 The sisters can do it by themselves. By A. Vilanculos

The buzz in Mozambique during the recent elections was not the TV debate among presidential candidates debate (there is none) or their programs  (all vague).

What had tongues wagging was citizen’s journalism, dispatches by ordinary folk about electoral irregularities from the Rovuma to the Maputo rivers.

Good stuff: government cars illegally used for campaigning, with cellphone pics of their registration plates (until officials wised up and started covering up plates and ministry logos with party posters). Reports of youth tearing downs other party’s posters, fistfights, intimidation, and police lack of impartiality.

On election day, people told of late opening of polling booths and misbehaviour of poll officials and party observers.

Information was relayed by a network of 110 correspondents in 11provinces (most community radio reporters) and concerned citizens who texted, phoned and emailed.

The information was fact-checked and collected in a daily bulletin produced by the Centro de Integridade Publica (an NGO anti-corruption monitor).

The bulletin, in Portuguese and English,  was emailed as pdf to some 3,000 subscribers, who redistributed it to at least double this number, and was widely reproduced, for free, by the local press, especially the 60+ community radio stations.

This was watchdog citizen journalism at its best.

Thanks to the Bulletin, Mozambicans had balanced coverage of the pre-poll partial exclusion of the new kid in the block, the opposition MDM, of the instances of ballot box stuffing and the invalidation of 100,000 votes.

The Bulletin provided a credible, professional and impartial source of information, above party politics (Mozambican media is aligned with political parties, ideological blocs and economic interests).

Bits of similar projecst exist elsewhere in Africa but I don’t know of any other so well-rounded.

In Kenya, during the post-electoral conflict two years ago, people texted and phoned in reports of violence to a hotline set up by an enterprising NGO. The information was quickly confirmed and uploaded onto a web map. The press, donors, and people could keep tabs on which parts of Kenya were burning.

Ghana made good use of sms by citizen correspondents during its recent elections.

Imagine if women developed such a tool.

Imagine that the 50-50 Campaign for equal political representation in Malawi could track women candidates during the campaign and the polls, and keep tabs on the insults, the stone-throwing, and the intimidation of women candidates seen last year.

In South Africa, during the 15 days against Violence against Women that started this week, a daily bulletin could keep track of gender-based abuse, collecting reports from police, rape crisis centres, and shelters. This would provide a graphic picture of South Africa’s second epidemic, after AIDS. 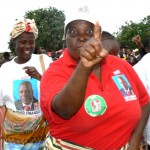 Grab it now! Pic b y A. Vilanculos

Historically, women are the last to use new technologies. This time, we should grab it now!

Check the Take Back the Tech site for cool ideas on taking control of digital technology to end violence against women.

And not only digital – one idea I liked  is to go for a walk with a chalk and write up your thoughts on public space.

Watch the sidewalks of my neighbourhood in Pretoria – have chalk and thoughts, will walk.