Warning: Creating default object from empty value in /home/gssn/public_html/ipsorg/blog/ips/wp-content/themes/platform/admin/class.options.metapanel.php on line 49
 Who Gains and who Loses in Transactional Sex? | IPS Writers in the Blogosphere

After A Deal With Iran Nationalist Extremism: The Real Threat to Israel

Who Gains and who Loses in Transactional Sex?

I had just landed my first holiday job at the end of my first year at the University of the Western Cape in South Africa. I was also about to land what I thought was my first love relationship. He was perfect. Well, so I thought.

Although years before my gender reassignment surgery, I presented myself as the female that I was. I found it thrilling that the caramel-skin, Don Juan-looking guy from the neighbourhood was interested in intimacy, while fully aware of what would be displayed by the time he would strip off my negligé.

Our first sexual encounter was planned according to the clichéd foam-bath-with-candles-and-rose-petals recipe.  A Sunday morning would be best, I proposed. We would be alone for four hours while my mother, with whom I lived in Cape Town, would be tending to her regular ritual of church and visitations. 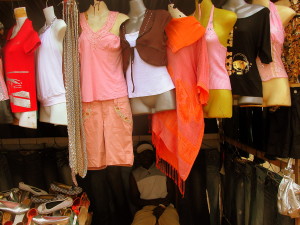 Soon it would be time for him to leave.  And then he stunned me with a demand that nearly made me regurgitate the champers and chocolates I had been fed at bath time.

He wanted payment for “services rendered” – in cash or in-kind! I could hardly stutter nor splutter a response, except to insist that sex is an exchange of mutual pleasure, not goods or cash.

Despite his veiled intimidations, I did not pay. I had yet to receive my first job pay cheque, was my defence.  Eventually he left, but not before he raided my cupboard for some choice items.  I’d just become an unknowing victim of a form of transactional sex.

Since time immemorial, transactional sex has flourished in many forms.  In South Africa (as I’m sure in many parts of the world), one such form widely practiced is that of teenage girls and young women trading their bodies for luxury goods.  However, they commonly disassociate their actions from prostitution.

In early April, transactional sex in South Africa was in the news. Alarmingly, we learned of a spike in HIV infections among young women, mostly due to engaging in transactional sex, in the latest report of the Human Science Research Council.

While the girls’ expectations are of expensive jeans, trendy takkies (shoes), a new cell phone or gold earrings, they are actually paid with HIV, the virus that has infected 6.4 million South Africans.

When I recall my first (and last) encounter with transactional sex, I still feel that bitter sense of powerlessness.

However, as the episode subsided and I received my first wages ever, I felt a sweet sense of empowerment. I could replace the goods taken.

Years later, I’ve earned many salaries and I’ve been in several relationships, both short and long term. Of course, I’ve received a gift here and a necklace there from a guy or two. But I know that it was given out of love, respect or like.

Those are the modes I advocate that we, as women, young or old, receive the things we like – not trading our bodies for it, and certainly not for HIV!