If you at all wonder why water – like most development issues, really – is a women’s issue, I urge you to invest five minutes of your time today and chow down on some recent numbers emerging from World Water Week in Stockholm.

Not only is women’s personal development hampered by disproportionate water-collection duties, their limited access to productive resources (because of gender discrimination), including irrigation, also causes lower food production overall and thus hunger in developing countries.

You want a side of statistic with that? No problem.

Investing in women-owned agriculture businesses could bring the number of the world’s hungry down by 100 to 150 million people.

Sit with that number for a second and then continue reading. 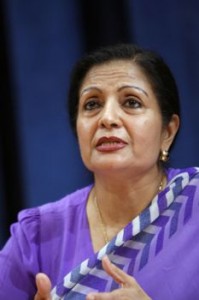 71 percent of the water collection burden falls on women and girls.

We all know the popular media image of women water bearers, but the development loss that occurs for women in that act is rarely quantified.

Progress has been made on improving secure water supplies in developing countries and reducing walking distances, but “783 million people still remain without access to an improved source of drinking water,” according to Puri.

She emphasised that “Creating a water- and food-secure world requires putting women and girls at the centre of water and food related policies, actions and financing.”

Rather than seeing women as “beneficiaries of greater water and food security,” they ought to be seen as contributors to greater progress.

Puri lists four urgent actions to “unleash their potential” [emphasis and formatting mine]:

1.  Women need to be recognised as water managers, farmers and irrigators, who contribute to ensuring sustainable food production and consumption and to safeguarding the environment.

This must be done in laws, policies and through social awareness programmes in communities.

2.  Governments and other partners need to ensure that women are empowered along the water and food supply chain, so that their food production and water management roles are supported.

3.  We need to address the multifaceted gender discriminations in accessing and controlling productive resources.

Women must be provided with technical training on water management, irrigation, rainwater harvesting, and rain-fed agriculture.

4.   Women must be recognised as decision-makers in water governance.

This involves reducing membership fees and broadening the mandate of irrigation schemes to acknowledge and include multiple water users.