Warning: Creating default object from empty value in /home/gssn/public_html/ipsorg/blog/ips/wp-content/themes/platform/admin/class.options.metapanel.php on line 49
 About Jim Lobe | IPS Writers in the Blogosphere 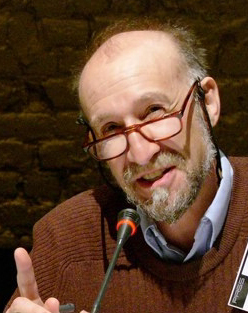 Jim Lobe has served as Washington D.C. correspondent and chief of the Washington , bureau of Inter Press Service (IPS), an international news agency specializing in coverage of issues and events of interest to developing countries, from 1980 to 1985, and again from 1989 to the present.

Since 9/11, Jim has focused much of his coverage on U.S. policy in the Middle East and the influence of neo-conservatives in and on the Bush administration.

He was the first journalist to cover the ties between the post-9/11 agenda pursued by the Bush administration and the recommendations of the neo-conservative-led Project for the New American Century (see, for example, Administration Factions Battle Over Bush’s War, September 21, 2001; and Cold War Intellectual Re-Enlist for War on Iraq, Arabs, November 7, 2001). He was also the first to relate that agenda to the controversial Defense Policy Guidance (DPG) draft paper that was overseen by then-Undersecretary of Defense Paul Wolfowitz and I. Lewis “Scooter” Libby, and leaked to the New York Times in March, 1992 (‘Pax Americana’ All Over Again December 27, 2001; and Bush’s Foreign Policy Blueprint: A Grand Global Plan, March 26, 2002). He was among the first to cover the split within the Bush administration between the coalition of hawks – neo-conservatives, aggressive nationalists, and the Christian Right – on the one hand and the “realists” centered in the State Department and the Central Intelligence Agency (CIA) on the other. Since 2001, many of his stories have dealt with the internal balance of power and its evolution over the six years in which Bush has been president (The Iraqi Temptation, October 16, 2001; Iraq Veers Into Washington’s Crosshairs, December 2, 2001; Plan for Post-Saddam Iraq Split on Familiar Lines, December 18, 2002; The Realists Rally, November 25, 2003; Neo-Con Collapse in Washington and Baghdad, June 1, 2004; The Bush Team Reloaded, Middle East Report, Number 234, Spring, 2005; and Bush’s War Hawks Edged Out of the Next, April 3, 2006).

Jim has lectured occasionally on U.S. foreign policy, neo-conservative ideology, the Bush administration, and foreign policy and the U.S. mainstream media at various colleges and universities around the United States. He has also lectured at the Institute of American Affairs, Chinese Academy of Social Sciences, Beijing, China; the Institute of International Relations in Hanoi, Vietnam; and the Graduate Institute of International Studies, Geneva, Switzerland (April, 2005). In 2004, he acted as defense attorney for the Project of the New American Century at the Brussels Tribunal in Brussels.

In addition to IPS, Jim has written for a number of internet publications, including Al Jazeera English, Alternet, TomPaine.com, Foreign Policy in Focus, RightWeb, The American Prospect, the Asia Times, and the Daily Star of Beirut, among others. He has also been featured on the BBC’s public-affairs program Panorama: “The War Party”, broadcast May 18, 2003 (transcript of interview); and on the Australian Broadcasting Corporation Four Corners public affairs program: “American Dreamers”, broadcast March 10, 2003 (transcript of interview).

His blog dedicated to Washington politics can be found at http://www.lobelog.com/. Started in 2007, LobeLog has been called a “must read” for those who follow U.S. policy on Iran by publications such as the Financial Times, the Economist, and The Guardian and has been quoted by most major U.S. newspapers, including the New York Times, the Washington Post, and the Wall Street Journal. LobeLog brings opinion from various experts in foreign affairs on topics such as conflict in the Middle East, diplomacy and U.S. foreign policy.