Warning: Creating default object from empty value in /home/gssn/public_html/ipsorg/blog/ips/wp-content/themes/platform/admin/class.options.metapanel.php on line 49
 2013 | IPS Writers in the Blogosphere 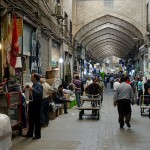 What is the state of Iran’s economy in 2013 compared to a year ago?

Iran’s economy enters 2013 significantly worse than a year ago, particularly with higher inflation and unemployment than at the beginning of 2012. The rial also plunged from around 11,000 to the dollar at [...]

According to former top advisers to George W. Bush and Barak Obama, the United States will preventively strike Iran in 2013 if no diplomatic settlement is reached over its nuclear program. From the Times of Israel:

During an on-stage discussion with Dennis Ross and Elliott Abrams halfway through the [...]

No changes in Iran-US relations expected until after Iranian election

This week Secretary of State Hillary Clinton and EU foreign policy chief Catherine Ashton indicated they wanted talks with Iran to resume even as the US’s dual-track policy of pressure and diplomacy (translation: more sanctions) continues: