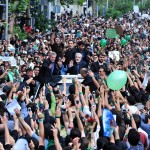 In a historic letter to President Barack Obama, 55 Iranian political prisoners describe the effect of the crippling sanctions regime on the Iranian people and plead for a new approach to the nuclear issue. They write:

Mr. President! We believe it is time to replace sanctions [...]

Beginning with a reference to a contentious report by the AP that used an alleged Iranian document provided by an “unnamed country” to suggest “that Iran is working on a bomb,” Mark Hibbs, a senior associate in Carnegie’s Nuclear Policy Program, writes that increasing reliance by the International [...]

Foreign Policy’s Stephen Walt highlights a chart by Belfer Center fellow Matt Waldman showing that as the US-led 2009 “Surge” in Afghanistan proceeded, US casualties increased. The pace in 2012 is also roughly similar to the toll from the previous two years:

Equally important, the final column (based on figures [...]

Amidst reports that Great Britain has denied the US military use of important British bases for an assault against Iran, Pentagon Press Secretary George Little told reporters on Friday that whenever the DOD considers military action “we do it within the legal confines…of this country.” The US [...]

The reluctance that dogs the West’s approach to Iran

The front page of the 13 July edition of the Daily Telegraph caused a stir in Britain. The headline, amplified by that morning’s BBC News, read: “We foiled Iranian nuclear weapons bid, says spy chief”. Referencing a speech by the Chief of Britain’s Secret Intelligence Service (SIS) to [...]

As the Syrian government’s brutal crackdown on anti-regime protestors intensifies and President Bashar al-Assad faces increasing criticism from allies, many are watching Iran’s response. Will the isolated Islamic Republic support its important friend until the end or distance itself from the Syrian regime’s sinking ship?

Does the selection of Iran’s nuclear czar as its new (interim) foreign minister say anything about nuclear negotiations between Iran and the West? We don’t really know, and given that the next round of talks is only a month away, we might not know until news breaks from Istanbul.

Sami Ramadani, a professor at London Metropolitan University who fled Saddam Hussein’s Iraq, writes that Iranian influence in Iraq is ‘highly exaggerated’. These overstated allegations, he implies, are especially rich coming from the United States, which Ramadani calls “the foremost foreign influence” in Iraq.

Ramadani, in the Guardian‘s Comment Is Free section, takes a crack at [...]