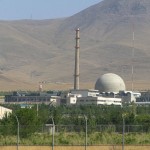 A Q&A on the Iranian Nuclear Crisis with Prof. Yousaf Butt

It’s not unusual for evidence supposedly indicating an Iranian nuclear weapons program to be leaked to the press, but how credible is that evidence and how should the press be handling it? For example, late last year, the Associated Press reported on a graph, allegedly from [...]

Those unnamed officials “from a country critical of Iran’s nuclear program” are at it again. This week they leaked an illustration to to the Associated Press which supposedly demonstrates that “Iranian scientists have run computer simulations for a nuclear weapon that would produce more than triple the explosive [...]