Warning: Creating default object from empty value in /home/gssn/public_html/ipsorg/blog/ips/wp-content/themes/platform/admin/class.options.metapanel.php on line 49
 Turning my life around: from self-harm to self-respect | IPS Writers in the Blogosphere

Turning my life around: from self-harm to self-respect

There was a time when I hated my roots and my life and I wished it would change. I blamed someone or something until I realized that, well, it is me who needs to change. And as hard as it was, I did change, for the better, and I want to tell you about it.

Life has thrown me so many stones that I thought I would collapse under the heap.

In my early teens, I was uncontrollable. The boys and men I had sex with never stayed. The alcohol disappeared and I would sink deeper in despair. I didn’t bother about who touched me where – I was a girl for public use.

Before you judge me, listen to my story. I am one of so many girls acting in a self-harming way because of a horrible beginning in life.

From the age of six, I was sexually abused by young uncles. Incest did not exist in my world in Kabarole, in rural Uganda, and later in Kampala, the capital. Sex was a way of life, not a way of giving pleasure, love and respect.

When I reached puberty, I just went on having sex with anyone. I did not think of unwanted pregnancies, sexually transmitted diseases and HIV. I didn’t know about these things.

Worse, I shut my ears to the few health education programs available in the early 2000s.

I got pregnant at age 15. I didn’t have a clue that a baby was growing inside of me. Someone who noticed told my family. Protecting the family name, they took me to hospital and the pregnancy was terminated.

Word got around in my boarding school. Nobody talked to me. My friends abandoned me. School became hell. To be expelled, I burnt my mattress.

Out of school, I was wild and reckless. In 2008, I got pregnant again. My boyfriend left me the moment I told him I was pregnant and had tested HIV-positive during the first antenatal care visit.

I was put on antiretrovirals (ARVs) and my beautiful baby girl was born HIV negative. But I didn’t follow the instructions of exclusive breastfeeding for six

months. I had little milk and no money for food for her or for me. She acquired HIV, nearly died and started ARVs when she was eight months old.

I am happy to say she is now a healthy, bouncy five years old. 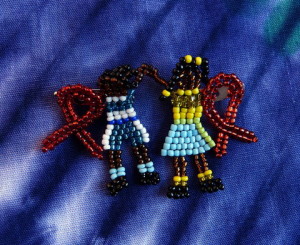 Adolescence is a turbulent time and young people need guidance to navigate it safely, says our blogger, herself a survivor of teen turmoil, who now counsels youth about HIV and unwanted pregnancies.

This was the turning point in my life. I wanted to, I needed to live differently.

I looked around and saw so many young people getting infected, feeling miserable and dying. AIDS is the biggest killer of teenagers in Africa today.

I thought: who knows how many have gone through a hard childhood like me? I can use my experience to warn young people about AIDS and unwanted pregnancy. And for those who already live with HIV, I can help them live positively.

I can give the one thing I never had: someone to talk to, someone to guide me. A red light telling me to stop.

Sometimes I see my uncles. I have not confronted them. I have forgiven them; I can’t dwell too much on the past. I have to let go or I won’t be able to move on with life.

I believe that everything happens for a reason. My painful past was an on-the-job training so today I can help young people live healthily and safely in the times of HIV.